Devyani Khobragade case: she was strip searched 'like other arrestees' say US Marshals 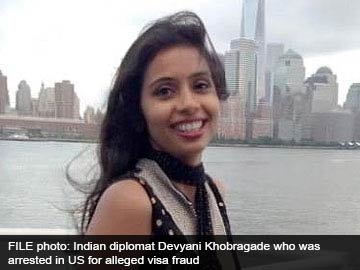 New Delhi/New York: At the centre of the diplomatic row between India and the US is the humiliation of high-ranking diplomat Devyani Khobragade, who was inexplicably treated like a hardened criminal after her arrest for alleged visa fraud last week. (Read)

In an email to her colleagues in the Indian Foreign Service, Ms Khobragade, the deputy consul general in the Indian consulate in New York, reportedly wrote that she was strip-searched, swabbed for DNA, cavity-searched and put in a cell with drug addicts.

The US and India are arguing about whether it was necessary to subject her to extraordinary measures reserved for criminals. (Read)

US Marshals confirmed that Devyani Khobragade was subjected to a "strip search", "the same as other arrestees held within the general prisoner population in the Southern District of New York."

The US Marshals' website says "strip searches on prisoners in custody are authorized when there is reasonable suspicion that the prisoner may be carrying contraband or weapons and is considered a security, escape or suicide risk."

The US Marshals have claimed Ms Khobragade was put in the "available and appropriate cell", but sources tell NDTV that many cells were lying vacant and the diplomat was made to walk past these and placed in the one with drug addicts.

Promoted
Listen to the latest songs, only on JioSaavn.com
US Marshals' spokesperson Nikki Credic-Barrett said, "The arrestee was placed in a cell with other female defendants awaiting court proceedings."

Last Thursday, Ms Khobragade, who has two young daughters, was handcuffed on the street while dropping her daughter to school. The US has alleged that she lied in the visa application of her domestic help and paid her only three dollars an hour, which was far less than American minimum wages. (Read)