Queried on the incident by reporters at Nagpur airport, Devendra Fadnavis said, "This is an example of narrow-minded mentality. The Shiv Sainiks who have done this have not understood the Shiv Sena." 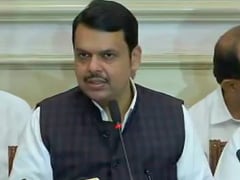 Senior BJP leader Devendra Fadnavis on Friday condemned the action of some Shiv Sainiks of washing a memorial of their party founder Bal Thackeray after former Sainik and current Union minister Narayan Rane visited it to pay tribute.

Rane, who had walked out of the Sena after a bitter fallout in 2005, had visited the memorial in Mumbai's Shivaji Park area on Thursday as part of his ''Jan Ashirwad Yatra'', after which some Sainiks washed the spot with ''gomutra'' (cow urine) and performed milk ''abhishek'' to "purify" it.

Queried on the incident by reporters at Nagpur airport, Mr Fadnavis said, "This is an example of narrow-minded mentality. The Shiv Sainiks who have done this have not understood the Shiv Sena."

He pointed out that the Shiv Sena was sharing power as part of the Maha Vikas Aghadi with those parties that had tried to send the late Sena patriarch to jail, a possible reference to the Congress-NCP regime which tried to act against Thackeray in July, 2000 over some allegedly inflammatory editorials but a magistrate''s court had thrown out the case terming it time barred.

"You can sit with such people, but when an old Sainik goes to pay tribute at Balasaheb's memorial, then you feel it has become unholy. This is wrong," the former Maharashtra chief minister said.