"3 Days, 3 Bills, Is It Pizza Delivery?" Derek O'Brien In Parliament

Last week, Trinamool Congress leader Derek O'Brien had said that the government used its "brute majority" in the Lok Sabha to bulldoze the "faulty RTI Bill". 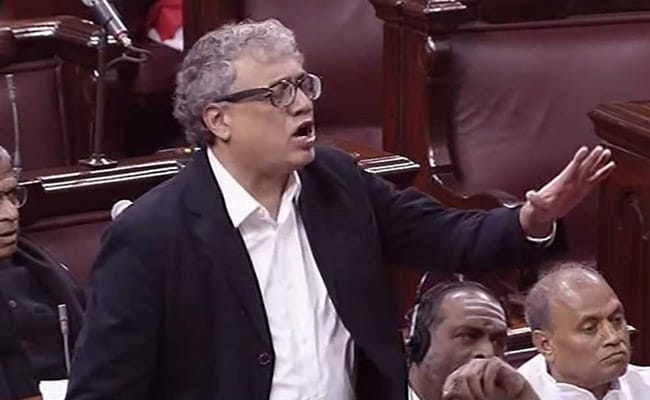 Derek O'Brien said the way the bills were being passed amounted to a "mockery of Parliament".

Trinamool Congress lawmaker Derek O'Brien today slammed the government over what the opposition has called the "hurried" passage of bills in the ongoing parliament session. The attack comes a day after the contentious bill to ban 'Triple Talaq' sailed through the opposition-dominated Rajya Sabha.

"Parliament is supposed to scrutinize Bills. This chart explains the bulldozing this Session. Are we delivering pizzas or passing legislation?" he tweeted on Wednesday.

He also attached a chart purportedly showing the contrast in the number of bills that were scrutinized when the Congress-led alliance was in power. He claimed that in the present Lok Sabha, only one out of the 18 bills passed were scrutinised, bringing the number down to 5 per cent.

#Parliament is supposed to scrutinize Bills. This chart explains the bulldozing this Session. Are we delivering pizzas or passing legislation? #ConstructiveOppositionpic.twitter.com/DKPDygpoV5

"Three days, three bills. It's like delivering pizza," he said.

On Tuesday, Mr O'Brien, one of Mamata Banerjee's most-trusted party leaders, said the way the bills were being passed amounted to a "mockery of Parliament" and that it was the government's way of "smothering" the opposition.

Tuesday's passage of the the Triple Talaq Bill in the upper house was aided by a series of walkouts and abstentions. The bill, which sought to end the practice of Muslim men instantly divorcing their wives by uttering "talaq" thrice, saw stiff opposition when it was presented in the Lok Sabha. But several of the parties that opposed it - including Nitish Kumar's Janata Dal (United), AIADMK and K Chandrashekar Rao's Telangana Rashtra Samithi - ended up aiding the bill's passage.

While the AIADMK and Nitish Kumar's party walked out, the Telangana Rashtra Samithi and Mehbooba Mufti's PDP stayed away from voting, bringing down the majority mark.

A number of opposition lawmakers abstained from voting. While 12 of the 13 Trinamool Congress members in the Rajya Sabha voted, one lawmaker - KD Singh - stayed away.

Last week, Derek O'Brien had said that the government used its "brute majority" in the Lok Sabha to bulldoze the "faulty RTI Bill". The bill passed the Rajya Sabha test too despite the opposition's objections. "Parliament has to scrutinise. It needs time for scrutiny. This is not a T-20 match," Mr O'Brien had said.