Demonetisation Was Tough Decision But People Supported It: PM Modi 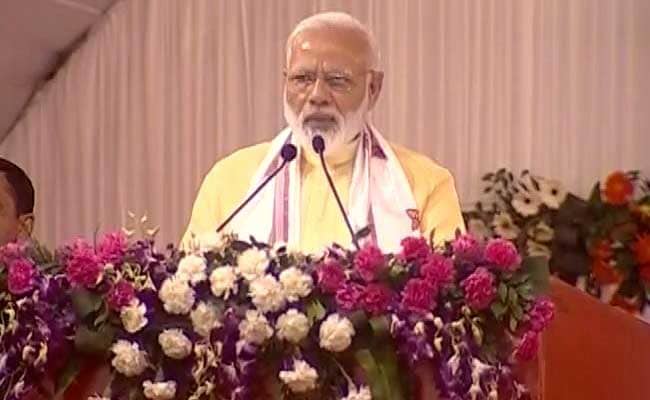 Guwahati: Prime Minister Narendra Modi today said the demonetisation drive was a "tough decision" to take in view of the opposition parties' constant efforts to turn people against it.

In the end, however, the people stood by the decision of his government, he told a rally here on the occasion of the BJP-led NDA government's completion of three years in office.

He said, "Demonetisation has brought 90 lakh people into the tax net. People stood by me shoulder to shoulder in this big decision".

PM Modi thanked the 1.25 crore people of the country for standing by him on every decision his government took.

On black money, the prime minister said, "We decided to take strong steps against black money. I know that for this I will face problems, but I won't hesitate as I have promised this to the people".

Indirectly criticising the previous governments at the Centre, PM Modi said that an Act was passed against "benami properties" in 1988, but it was never notified.

"What kind of governance was this? For the first time in India, honesty is getting a chance. An honest person is thinking of living peacefully for the first time," he observed.

The prime minister said that because of his honest decisions, he had faced huge problems, but he would always stand by it as promised to the people.

Highlighting some of his government's achievements, PM Modi referred to the setting up of OBC Commission, Swachch Bharat campaign, surrender of LPG subsidy by people, spread of Internet to villages, transforming post offices into banks, irrigation system and providing LED bulbs to common people.

He took a dig at previous governments for slow speed of work, saying there was a big mismatch between people's expectations and implementation of schemes or projects.

He took credit for trying out new things, saying, "Everyday there is a new initiative. There is a change in the work culture. The country is feeling the change. In the last three years, there was not a single day when we did not take a step".

Talking of a new India he wants to see, PM Modi said, "We have to build a new, developed India. There should be respect for all work and workers. Women will travel equally. There will be no discrimination to anyone and all will be equal".

Promoted
Listen to the latest songs, only on JioSaavn.com
During his day-long tour of Assam, PM Modi said projects worth Rs 3,500 crore had been either conceived or commissioned in the state in a single day.