Delhi's 'Bharat Darshan Park' With 21 Monuments To Open By October

The Bharat Darshan Park, spread over 8.5 acres, is being developed by the South Delhi Municipal Corporation in west Delhi's Punjabi Bagh. 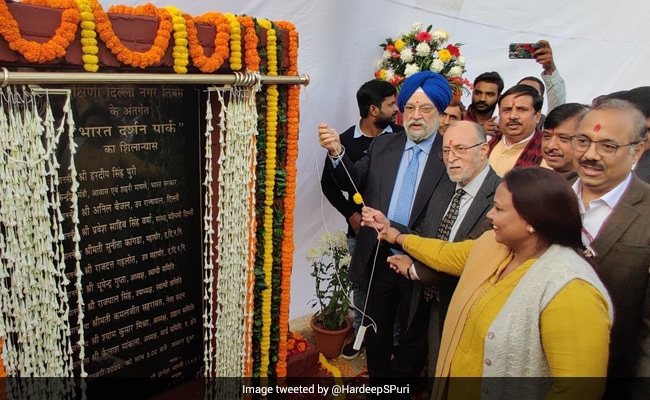 Bharat Darshan Park is being developed on the lines of the municipality's Waste to Wonder Park.

Delhi's much-awaited 'Bharat Darshan Park' that will have replicas of 21 monuments from across the country is likely open by October and is expected to have an entry fee of around Rs 100, officials said.

The park, spread over 8.5 acres, is being developed by the South Delhi Municipal Corporation (SDMC) in west Delhi's Punjabi Bagh at an estimated cost of Rs 14 crore.

SDMC officials said that the 'Bharat Darshan Park' is being developed on the lines of the municipality's already functional 'Waste to Wonder Park' and like here, all monuments at the new park have also been built using scrap material from vehicles.

"Leaving aside the construction of a walking track and some plantation work, most of the major construction work has been completed. Finishing touches are required. Everything will be finished soon, and we are hoping to open the park for visitors latest by October," a senior SDMC official said.

Like the 'Waste to Wonder Park', visitors will have to pay some entrance fee for the 'Bharat Darshan Park' as well, he said.

"Entrance fee for the park is yet to be decided, but it is likely to be around Rs 100," the official said.

The SDMC's iconic 'Waste to Wonder Park' has an entry fee of Rs 50 on weekdays and Rs 100 on weekends.

The 'Bharat Darshan Park' will have replicas of 21 historical and cultural monuments and natural places. These will be made from scrap iron such as bolt, rods and steel rims of vehicles.

Replicas at the 'Bharat Darshan Park' will include those of the Gateway of India, the Khajuraho Temple, the Konark Temple, the Hawa Mahal, the Ajanta and Ellora Caves, the Ruins of Hampi and Nalanda, the Mysore Palace, the Charminar, the Sanchi Stupa, the Gol Gumbaz, the Junagarh Fort and the Char Dham - Temples of Badrinath, Rameshwaram, Jagannath Puri and Dwarka.

"Earlier only 17 replicas were to be made, but later it was changed and we decided to include Char Dham in the list as well. So now the number of replicas will be 21," SDMC's Horticulture Director Alok Singh said.

The park was subject to a controversy after the Delhi Sikh Gurudwara Management Committee raised objections over construction of a replica of the Golden Temple. The replica was dismantled later.

Singh said that the civic body is expecting a good footfall at the park and hence, adequate arrangements of parking will be made.

"We have identified an empty park opposite the 'Bharat Darshan Park'. This site will be used for parking of vehicles. More arrangements will be made if the need arises," he said.

Singh said that a solar energy plant of 110 Kw will also be installed in the park.

The replicas will be illuminated with the help of decorative lights and the park will have a children's play area, fountains, ponds, cafeteria and an amphitheatre for cultural events, the officials said.