The Yamuna river in Delhi has swelled up following the release of 8.28 lakh cusec water from Haryana's Hathni Kund Barrage on Sunday. 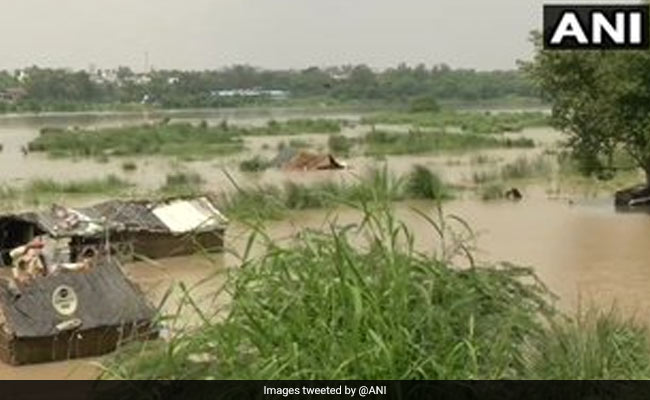 Some residents complained of a lack of preparedness by the authorities.

As the Yamuna continues to flow close to the danger mark in Delhi, water from the overflowing river entered in the low-lying areas at Kisan Colony and Yamuna Khadar near ISBT in the national capital on Tuesday.

The cremation ground at Nigambodh Ghat has also got submerged. The river has swelled up following the release of 8.28 lakh cusec water from Haryana's Hathni Kund Barrage on Sunday.

Some residents complained of a lack of preparedness by the authorities.

"There have been no arrangements of safety from the administration. Many of us are without tents, food or drinking water," a resident of the Yamuna Khadar area told news agency ANI.

The administration, however, said that necessary steps are being taken, including the evacuation of people.

"Since Monday the rescue operation is being carried out and we have evacuated around 1,000 people till now. We are trying to provide all of them with tents and arrangements are being done for medical and food as well," Sub-Divisional Magistrate, Devendra Upadhya told ANI.

Meanwhile, Northern Railways has restricted trains speed to 20 kmph on Yamuna bridge as the water level has crossed the danger level. If the Yamuna water level crosses the level of 206.4, the railway will stop the train movement from the bridge.

The Delhi government has issued a flood alert and ordered the evacuation of people from areas close to the river.