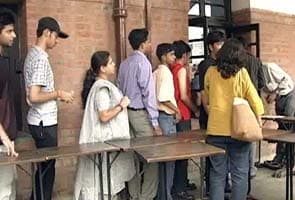 New Delhi: You are 18. Have been slogging it out for the last two years to ensure you get admission to a top college in Delhi University. Well, if you are looking to do a B Com Honours course at the Sri Ram College of Commerce (SRCC), you need to have scored 100 per cent in your class 12 board exams to even try for the first list. (First cut-off list for Arts and Commerce)

At the nearby Hindu College you'll need 99 per cent marks and if you settle for the south campus, Lady Sri Ram college has a first list cut-off at 97 per cent. Admissions begin tomorrow and students are in a daze. Cut-offs for science courses are not much better. (First cut-off list for Science)

The marks needed for admission are expected to go down in the second list, but by how much is anybody's guess. Four more cut-off lists will be released on June 21, June 27, July 2 and July 8.

Jammu and Kashmir chief minister Omar Abdullah, whose school-going children study in Delhi, summed up a parent's bewilderment succinctly when he tweeted, "Worry? I'm terrified for my sons because in five years, when Zamir (Omar's son) moves to college, the cut-offs will be even more insane." And he asked, "If 100 per cent is the minimum requirement to be considered for admission, are there kids coming with more than 100 out of 100...With these kinds of cut-off marks I would have been doing a correspondence course because I wouldn't have even got a "pass course" admission." (Read: Omar the dad terrified by Delhi University cut-offs)

Even Human Resource Development Minister Kapil Sibal admitted a 100% cut-off was "irrational." Sibal said, "In one college, in the commerce stream, the cut-off is 100 per cent. I felt very sad especially for parents whose children have worked very hard and got 97.5 per cent...I want to tell the parents and students that we are on your side and will request the Vice Chancellor and colleges to take note." (Watch: 100 per cent cut-off irrational, says Kapil Sibal)

CPM leader Sitaram Yechury today told NDTV that the present scenario of sky-high cut-off would have kept even Shakespeare out of college. (Watch)

The DU Vice Chancellor Dinesh Singh was right beside the minister and asked students to "rest assured the cut-offs will come down in the subsequent lists."

And the DU Dean of Students, JM Khurana, sought perhaps to make bewildered students feel better when he said, "All is not lost and students must not give up hope."

But, what exactly does a college hope to do when it asks for 100% marks to get admission? The principal of SRCC, PC Jain, explained that the cut-off was "the screening process."

Seeming largely unmoved by the stunned expression of students around, Mr Jain said, "The move is not to discourage but to screen the students. After all how do you reject? You must have some criteria. And the criteria is transparent. It is open to the public. The public has never criticized before today, I believe. No one has challenged it in the last 20 years, everyone has appreciated it. Faculty, students, university and parents have all appreciated the criteria. No educationist has ever questioned the criteria." (Watch: High cut-off not to discourage science students, says SRCC principal)

Promoted
Listen to the latest songs, only on JioSaavn.com
SRCC has 252 seats and the principal wants the best. "There are limited seats hence the best students need to get admission," he says, and holds that if all specialized institutes like Engineering or Medical colleges admit students on their own criteria, a specialized Commerce college should be allowed to do so too.

The premier college is not known to issue a second list, usually filling up all its seats in a go. So now what? Principal Jain will merely say, "Let's go by the first list. If there is scope for a second list, we will certainly go for the second, third or the fourth list. There is still hope. We will take select the best in the second, third list."