The Delhi Police's counsel said it can hand over the Nizamuddin Markaz keys only to the person from whom they had taken possession. 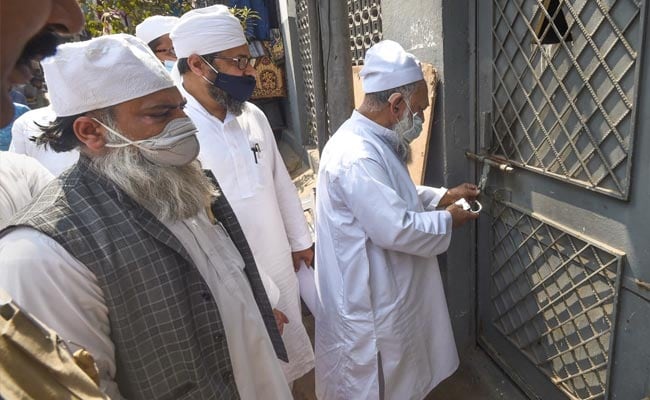 Police claimed before the court that Maulana Saad was missing. (File)

The city police on Monday told the Delhi High Court that it has no objection in handing over the keys of the Nizamuddin Markaz, which was closed in March 2020 for holding a Tabliqhi Jamaat congregation amid the COVID-19 pandemic, to jamaat leader Maulana Saad.

The Delhi Police's counsel contended that it has not been provided with the documents as to who is the actual owner of the Nizamuddin Banglewali Masjid and it can hand over the keys only to the person from whom they had taken possession, who is Maulana Muhammad Saad.

While police claimed before the court that Mr Saad is missing, a member of the managing committee of the markaz claimed that he was very much there on its premises and can appear before the agency to get the keys.

During the hearing, Justice Jasmeet Singh said, "You (police) have taken the possession from some person. You return the possession to that person. I am not adjudicating an FIR for title of property here that is not the issue before me. You find out what you have to do but give the keys. You cannot keep it with you."

The high court was hearing a petition by the Delhi Waqf Board seeking a direction to reopen the Nizamuddin Markaz, comprising the masjid, the Madarsa Kashif-ul-Uloom, and a hostel, following its closure after the onset of the pandemic.

In May, the high court passed an interim order allowing the reopening of certain areas of the Markaz that were closed following the Tablighi Jamaat congregation.

The central government, in its affidavit, had opposed the reopening of the premises completely.

Earlier this month, police filed an application for a direction to the Delhi Waqf Board to produce documents related to the ownership of Nizamuddin Banglewali Masjid.

Lawyer Rajat Nair, representing the Delhi Police and the Centre, argued that the original possessor has not come forward to take control of the property and under the Delhi Waqf Act, the 'mutawali' has to come forward and not the Delhi Waqf Board, which is the petitioner here.

He said if the original person is before the high court, the keys can be returned to him but he is not here.

Senior advocate Sanjoy Ghose, appearing for the petitioner board, said the waqf property belongs to the almighty and they are only the custodians of it. He said they can give the keys to the managing committee.

The high court, which said it was not going into the issue of the title of the property, asked the police, "Are you in possession? In what capacity have you taken possession? The FIR was registered under the Epidemic Diseases Act…that is over now."

"If you take a property under the Epidemic Diseases Act and register an FIR, then whosoever was in possession at that point of time, would have to file a suit for possession?" the judge asked.

When the police's counsel said the possession was taken from Mr Saad, the high court asked where he was and why cannot he go and take the keys.

To this, the counsel for the managing committee said Mr Saad was in the markaz and that he can go and take the keys from the police.

The court, in its order, noted, "The counsel for the respondent (police) states that the respondent will have no objection in handing over keys to Maulana Saad on furnishing an indemnity bond in the form as required by them."

It also said no documents would be required to be submitted for this purpose. "In view of the above, the petitioner does not wish to prosecute the petition further. The writ petition is disposed of," the court said.

It said before the petition is disposed of, it is just and necessary that the rightful owner or possessor of the "alleged waqf property" is brought on record so that suitable orders may be passed with respect to its maintainability.

Several FIRs were registered under the Epidemic Diseases Act, the Disaster Management Act, the Foreigners Act and various provisions of the penal code in connection with the Tablighi Jamaat event held at the markaz and the subsequent stay of foreigners there during the pandemic-induced lockdown in 2020.

The Delhi Waqf Board had moved the court last year seeking directions to reopen the premises on the ground that even after 'Unlock-1' pandemic guidelines permitted religious places outside containment zones to be opened, the markaz continues to be locked.

In its affidavit affirmed by the Deputy Commissioner of Police, Crime, the Centre had told the court it was "necessary and incumbent" to preserve the markaz property as the investigation in the case registered for violation of the COVID-19 protocols has "cross borders implications and involves nation's diplomatic relationship with other countries".

The waqf board, represented by lawyer Wajeeh Shafiq, had earlier argued that the mosque, which was under the lock of the Delhi Police, should be opened as the Delhi Disaster Management Authority (DDMA) has now lifted all restrictions that were imposed on account of the pandemic.

The Delhi Police's crime branch had in March 2020 lodged an FIR against seven persons, including the cleric, on a complaint by Nizamuddin station house officer here for holding a congregation of Tablighi Jamaat followers in alleged violation of the orders against large gatherings to contain the spread of the coronavirus.

The Enforcement Directorate has also filed a money laundering case against Saad, trusts linked to the Jamaat, and others.