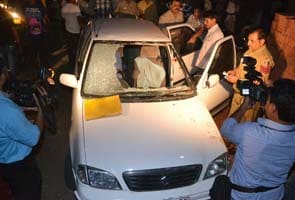 New Delhi: Lawyers in Delhi's lower courts have called a strike today to protest against an attack on three judges traveling together in a car on Thursday evening. The judges were returning home from the Saket district court, where they work, when their car hit a motorcycle in south Delhi's Dakshinpuri. Four bikers then gathered around and in a fit of road rage, allegedly hit the judges with sticks and stones.

Metropolitan Magistrate Ajay Garg who was hit on the head was hospitalised along with Chaman Lal, the driver of the car, at Delhi's AIIMS Hospital. Doctors said medical tests had been done and the injuries were not major. The two men are likely to be discharged later in the day. The two other judges, Additional Sessions Judges Inderjit Singh and M K Nagpal, were not hurt.

Promoted
Listen to the latest songs, only on JioSaavn.com
The motorcyclists abandoned their bikes and ran away. The police have arrested two people in connection with the incident and have registered a case of attempt to murder. They will be produced in court later today.  The police said one of those arrested claimed to have been injured in a scuffle with those in the car,  but police sources say that prima facie, the injuries seem self-inflicted

The president of the Saket Court Bar Association, Madan Lal, said this morning that he had called upon all Delhi advocates to stay away from work if the police did not take proper action in the case. Mr Lal said it was not a spontaneous assault and that the accused attacked the judges in a pre-planned move.