Delhi government also appealed to the people that if they see any type of violation of anti-dust norms, they can complain on the Green Delhi App by clicking photographs. 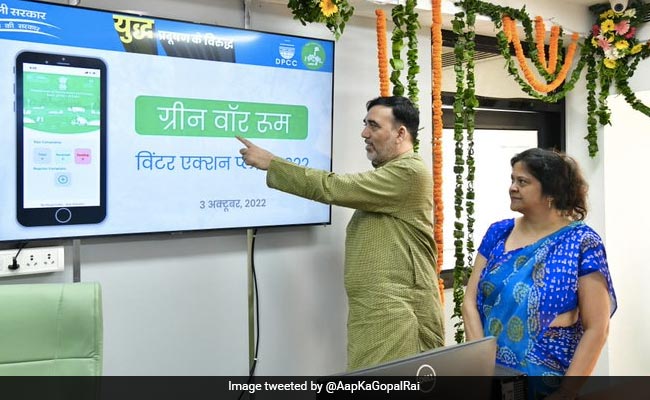 To control pollution in this winter season, Delhi Government on Thursday launched a month-long intensive anti-dust campaign at construction sites.

Environment Minister Gopal Rai announced the campaign and said, "Chief Minister Arvind Kejriwal announced the Winter Action Plan. In the first phase of the plan, we operationalised a war room in the Delhi Secretariat on October 3. Today, we are starting an anti-dust campaign in Delhi. The anti-dust campaign will be run in Delhi till November 6. It is compulsory for all construction sites to follow all 14 anti-dust norms and strict action to be taken against violators."

Talking about the 14-point anti-dust norms, Minister said that all the construction companies have to build huge tin walls around the construction sites in order to stop the dust from spreading.

Construction sites with an area greater than 20 thousand square meters are required to have four anti-smog guns.

Mr Rai said that under the new norms construction or demolition work is required to be covered with tents or nets.

He said that stone cutting during construction could not be done in the open and wet jetting should be used to cut stones.

"It is required to spray water in non-cemented and oily areas to avoid spreading of dust. Construction or demolition sites with an area greater than 20 thousand square meters need to have a metalled road with black topple so that transportation of vehicles does not result in spreading of dust," he added.

Mr Rai clarified that all the sites have to follow these rules and action will be taken if someone defaults in following them. A penalty from Rs 10 thousand to upto Rs 5 lakhs can be imposed and if there is a serious violation, we will order a shutdown of the construction site.

The Graded Response Action Plan (GRAP) system has also been in force in Delhi as per which all the construction sites with areas above 500 square meters need to register them on the portal. If any site is not registered, it will be barred from further construction. Moreover, PUC checking and water sprinkling campaigns are implemented with effective monitoring.

Delhi government also appealed to the people that if they see any type of violation of anti-dust norms, they can complain on the Green Delhi App by clicking photographs.