Delhi Chief Minister Arvind Kejriwal had said the anti-encroachment drive in Delhi will leave 63 lakh people homeless, adding that if continued it will be the "biggest destruction" in Independent India 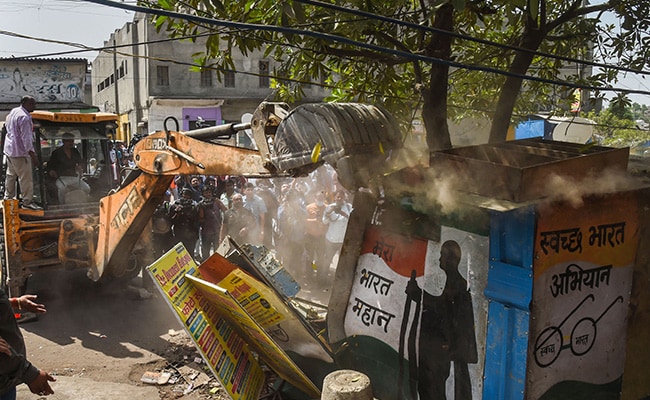 The Delhi government has sought a report from three BJP-run municipal corporations on demolition drives carried out in the city since April 1. The development comes days after an anti-encroachment drive in various parts of Delhi triggered tensions between the BJP and the ruling Aam Aadmi Party, or AAP, of Chief Minister Arvind Kejriwal.

Mr Kejriwal had said the anti-encroachment drive in Delhi will leave 63 lakh people homeless, adding that if continued it will be the "biggest destruction" in Independent India.

The Chief Minister also questioned what he called the moral, constitutional and legal authority of the BJP-ruled civic bodies to launch such a large-scale drive at the fag-end of their terms.

At a meeting with AAP MLAs earlier this week, Mr Kejriwal told them that they should be ready to go to jail for opposing the anti-encroachment drive.

"They are reaching colonies with bulldozers and razing any shop and house. Even if people show them papers to prove that the structure is not illegal, they do not check them," he said.

The AAP is against the way the anti-encroachment drive is being carried out, Mr Kejriwal said, adding that nearly 50 lakh people stay in unauthorised colonies, 10 lakh in 'jhuggis' and lakhs of people have modified balconies or made changes that do not conform to original maps.

"That means homes and shops of 63 lakh people will be bulldozed. This will be the biggest destruction happening in independent India," said the Delhi Chief Minister.

The anti-encroachment drives by BJP-ruled municipal corporations started in the national capital after party president Adesh Gupta wrote letters to mayors requesting action against encroachments by Rohingya and Bangladeshis living illegally in the city.

The demolition in Jahangirpuri, right after communal clashes in the area, had grabbed headlines with opposition leaders questioning its timing and motive and alleging that the civic body's bulldozers targeted one community.

The Municipal Corporation of Delhi, or MCD, has come under severe criticism after locals and opposition parties called its anti-encroachment drive politically motivated and timed just as the civic body's term ends on May 18.