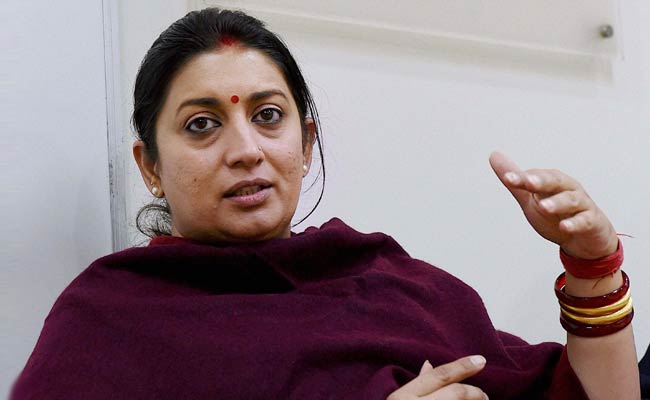 New Delhi: A Delhi court would on October 6 decide on whether to summon Union Minister Smriti Irani on a complaint filed against her for allegedly giving false information regarding her academic qualifications in affidavits to the Election Commission.

Metropolitan Magistrate Harvinder Singh, who was scheduled to pronounce the order today, put it off saying the order was not ready.

The court had reserved its order after hearing arguments advanced by complainant Ahmer Khan, a freelance writer, and going through the reports submitted by the Election Commission and Delhi University regarding Ms Irani's educational degrees.

The court was earlier told by an official appearing for the poll panel that the documents filed by Ms Irani regarding her educational qualification while filing nominations were not traceable. However, the information on this was available on its website, it had said.

In pursuance to the court's earlier direction, DU had also submitted that the documents pertaining to Irani's BA course in 1996, as purportedly mentioned by her in an affidavit filed during 2004 Lok Sabha elections, were yet to be found.

The court had on November 20 last year allowed the complainant's plea seeking direction to the officials of EC and DU to bring the records of Irani's qualifications after he said he was unable to place them before the court.

The complainant had alleged that Irani had deliberately given discrepant information about her educational qualifications in affidavits filed before the poll panel in 2004, 2011 and 2014 and not given any clarification despite concerns being raised on the issue.

Promoted
Listen to the latest songs, only on JioSaavn.com
Mr Khan had alleged that Irani had knowingly furnished misleading information about her qualifications in affidavits filed before EC and that a candidate, deliberately giving incorrect details, could be punished under provisions of the IPC and under section 125A of the Representation of the People Act (RPA).

Section 125A of RPA deals with penalty for filing false affidavit and entails a jail term of up to six months or fine or both.