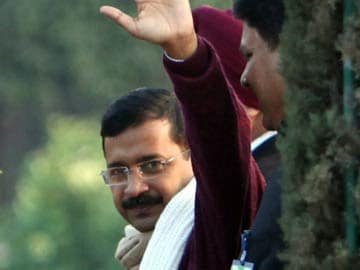 New Delhi: Delhi Chief Minister Arvind Kejriwal, dressed casually in a simple maroon pullover and his trademark muffler around his neck, was the centre of attraction at President Pranab Mukherjee's At Home reception on the occasion of Republic Day on the expansive lawns of Rashtrapati Bhavan in New Delhi on Sunday.

After President Mukherjee greeted the guests, mingling among the gathered dignitaries, bureaucrats and ambassadors, the people soon realised that the city's new chief minister was in their midst. A crowd soon formed around Mr Kejriwal, with people jostling to get closer and introduce themselves. Some foreign dignitaries too approached him to speak to the bureaucrat-turned-activist-turned-politician, whose every move makes news.

Mr Kejriwal answered queries posed to him patiently, explaining the motive behind the sit-in by him and his ministers last week and also defended his Law Minister Somnath Bharti's recent actions and utterances which has drawn him and the Aam Admi Party government a lot of flak from all sides.

As one group of people left, another group gathered around the chief minister. Even after most guests had left, Mr Kejriwal still had a crowd around him. Prodded by some about the president's Republic Day address comment that "populist anarchy cannot be a substitute for governance", Mr Kejriwal had a simple answer "Let's have a debate on the subject".

There were some people taking photographs of the chief minister on their mobile phones, though mobiles were a strict no-no at the function. Among those clicking him was a Congress party worker from Madhya Pradesh, Kazi Aasif-uddin, a zila Congress committee worker and part of the minority cell of the Congress in the state. Mr Kazi admitted he was an admirer of Arvind Kejriwal.

Somnath Bharti, who has attracted flak for his midnight raid on African nationals in South Delhi's Khirki Extension over an alleged "drugs and prostitution racket", walked in to the reception a little late and also attracted crowds. Dressed in a blue kurta, Mr Bharti had a tough time justifying the raid to some media persons.

Promoted
Listen to the latest songs, only on JioSaavn.com
According to the President's Press Secretary Venu Rajamony, the crowd at Sunday's At Home was much bigger than earlier. President Pranab Mukherjee too spent more time mingling with guests this time. After he took over, President Pranab broke from tradition to mingle with guests instead of just restricting himself to a cordoned VIP section.