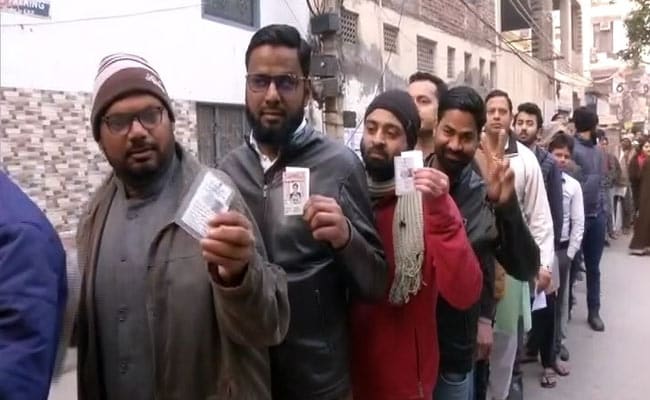 Delhi recorded a provisional voter turnout of 57.06 per cent for Saturday's Assembly polls, the Election Commission said this evening, cautioning that the figure was "bound to increase" because voting had not yet concluded in around 103 booths. The poll body also said voting had taken place "smoothly" and without incident. The tentative figures are, however, well below the 67.5 per cent recorded in 2015 - a record for Delhi - but represent an impressive finish given poor turnout through most of the day.

Mr Singh also said that Rs 12 crore cash had been seized and that this election saw the introduction of 11 new apps designed to help candidates and voters.

The aggregate also said the BJP would win 17 and the Congress, which drew a blank in the last election, would take home a single seat.

Voting was held for all 70 of Delhi's Assembly seats today, with nearly 2,700 polling stations and 13,000 booths set up across Delhi opening at 8 am.

Voters had appeared reluctant to cast their votes, with turnout in the morning and early afternoon below 2015 levels; 4.33 per cent was recorded at 9 am against 5.4 per cent for the same time five years ago.

Earlier today Mr Singh told NDTV initial low turnout could have been because of the cold weather.

Today's polling marked the end of a bitterly fought campaign that saw coarse language, hate speeches and communally-charged attacks, with four BJP leaders - including UP Chief Minister Yogi Adityanath and Union Minister of State Anurag Thakur - get notices from the Election Commission.

Around 1.47 crore people had been eligible to cast their votes today, with over 670 candidates to choose from as Mr Kejriwal's AAP seeks to retain power.

Election results will be declared on February 11.