Delhi Assembly Elections On February 8, Results To Be Declared On February 11: Live Updates

Delhi election dates: The Election Commission has announced the schedule for the Delhi assembly elections.

The Election Commission has announced the schedule for the Delhi assembly elections. The elections will be held on February 8 and results will be declared on February 11.

A total of 1.46 crore voters can exercise their franchise in the upcoming Delhi Assembly elections, according to the final electoral list for Delhi published today. Chief Electoral Officer (CEO) Delhi Ranbir Singh said the final publication of voters list shows there are total 1,46,92,136 voters in Delhi including 80.55 lakh males and 66.35 lakh females.

This will be the first election in Delhi  since the BJP swept the Lok Sabha polls early last year; the party swept all 7 parliamentary seats in Delhi.

Some key issues the three main parties in this election - AAP, BJP and Congress - are likely to focus on are the pollution crisis that engulfed the city state in the final few months of last year and controversy over the centre's move to regularise 1,731 unauthorised residential colonies.

Here are the LIVE Updates from Delhi Election Schedule announcement:

Jan 06, 2020 17:13 (IST)
Our Campaign Will Be Positive: Arvind Kejriwal
We will talk of development. It will be a positive campaign. We will not abuse anyone in our election campaign. We want the cooperation of all parties to make Delhi better 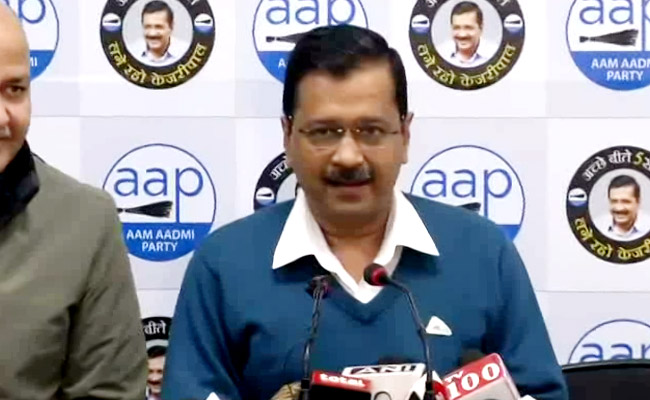 Jan 06, 2020 15:50 (IST)
Delhi elections: Key dates
Notification to be issued on Jan 14.
Last day of nominations is Jan 21.
Scrutiny of nominations on Jan 22.
Last date of withdrawal: Jan 24
Date of polls: Feb 08
Results: Feb 11
Jan 06, 2020 15:47 (IST)
Delhi elections: The model code of conduct will come into force immediately
Jan 06, 2020 15:46 (IST)
Contact number of observers made public
The contact numbers of observers have been made availabe to the public, the Chief Election Commissioner said.
Jan 06, 2020 15:41 (IST)
All Polling Booths Have Assured Minimum Facilities: Chief Election Commissioner
All polling stations in Delhi have assured minimum facilities. All voting stations will be on the ground floor. Voters will have access to toilets and medical kits will be provided.
Jan 06, 2020 15:38 (IST)
Delhi Assembly elections 2020
All arrangements of final publication done. For Delhi, verification done from September 1 to October 15. There are 1,36,9600 plus voters.