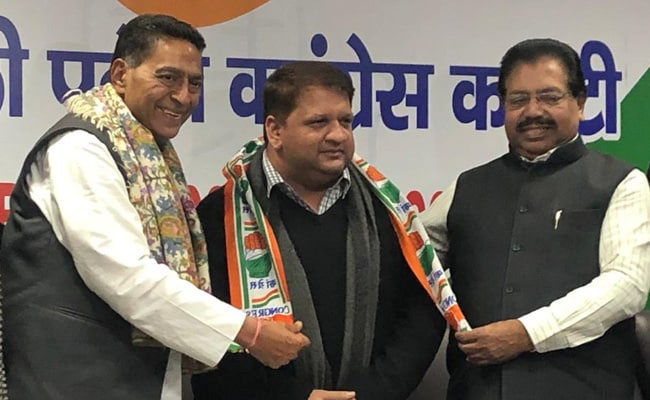 In a setback to the AAP, two of its MLAs quit the party after they were denied ticket for the February 8 Delhi Assembly election with one of them joining the Congress on Saturday.

While Mr Shastri joined the Congress on Saturday, Mr Singh said he was in talks with the Shiromani Akali Dal, an ally of the BJP.

Badarpur MLA ND Sharma, who quit the AAP earlier this month, said on Saturday that he has joined the Bahujan Samaj Party (BSP).

Both Mr Shahtri and Mr Sharma are likely to be fielded from their respective seat by their new party.

The three leaders were among the 15 members of the outgoing Assembly who were denied ticket ticket by the AAP this time.

Mr Shastri alleged that the party was "selling" tickets and accused Chief Minister Arvind Kejriwal of acting in an autocratic manner.

He further added that the AAP pretended to be an honest party and "made bus tickets free for women but are charging Rs 10 crore for an assembly seat ticket".

"Does that mean when he previously contested from the AAP, he bought the ticket. The ticket distribution was strictly made on the basis of the performance of the MLAs which was closely scrutinised. All those MLAs whose performance was found to be not up to the mark were dropped," he said.

In the Dwarka seat, the AAP replaced Mr Shastri, the grandson of former Prime Minister Lal Bahadur Shastri, by Vinay Kumar Mishra, Congress leader Mahabal Mishra's son who joined the party a day before the candidates' list was released.

Mr Singh was replaced by former Congress councillor Rajkumari Dhillon who had joined the party with Mr Mishra.

Mr Singh said he was disappointed with the party for denying him a ticket and nominating Ms Dhillon.

"Even during the Lok Sabha election, I raised my objection over alliance with the Congress and now they have brought in five people from Congress who are directly or indirectly associated with (anti-Sikh riots convict) Sajjan Kumar," he said.

Badarpur MLA ND Sharma, who quit the party protesting against induction of Congress leaders into the party fold, too had alleged that the party was selling tickets.

Mr Sharma was also dropped, and AAP fielded Ram Singh Netaji, who joined the party from Congress, from the Badarpur seat.

Shashtri further said that he had left a high-paying corporate job to associate with Aam Aadmi Party.

"I left a high ranked post in a MNC where I earned in crores, under attraction of Kejriwal''s talks of honesty and Janlokpal. But, I am disillusioned now with AAP and Kejriwal''s dishonest politics," Shastri alleged in a press conference.