Bihar children deaths: Eight additional advanced life-support ambulances have been deployed by the government for transportation of critical patients in the affected districts

It is a case that has exposed India's crumbling health care system - 140 children have so far died this year in what's now an annual encephalitis outbreak in Bihar.

One of the poorest states, Bihar has been struggling with an outbreak of Acute Encephalitis Syndrome since the start of June, affecting more than 600 children in more than a dozen districts. The situation was worsened by a heat wave that saw temperatures crossing 45 degrees Celsius (113 Fahrenheit) in recent weeks.

Most of the deaths occurred due to hypoglycemia or very low blood sugar levels, said Kaushal Kishore, additional secretary of Bihar's health department.

The outbreaks have been happening during summer months since 1995 in the country's largest lychee cultivating region.

Some experts, including the authors of a study published in The Lancet, have linked the high incidence of hypoglycemia on the naturally-occurring toxins in lychee fruit - consumed by malnourished children - along with the absence of an evening meal. 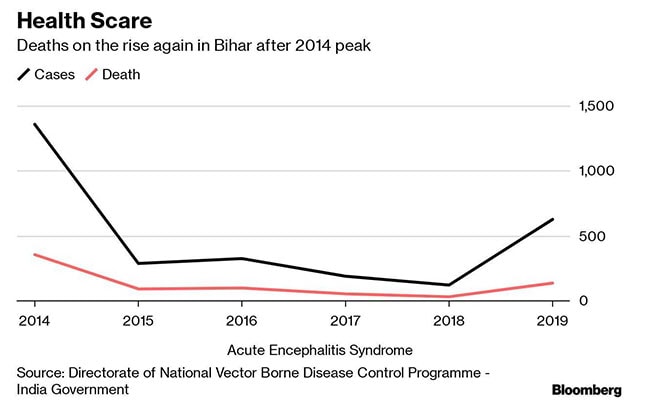 Depriving the brain of glucose puts children already weak from malnutrition at high risk of seizures, said Kapil Goel, one of the study's authors and the head of the Department of Community Medicine at the Government College in Uttar Pradesh. "But when these people reach the district hospital, which takes about four hours, precious time is lost so the rate of mortality increases," Goel said by phone on Friday.

Death rates fell from a peak in 2014, when 355 children died. Yet a lack of basic health care facilities meant the awareness campaign - urging parents to make sure their children avoided lychees, had an evening meal and accessed glucose treatments - fell away and fatalities are on the rise again, Goel said.

Local TV channels have shown footage of limp children lying two or more in overcrowded hospitals that are poorly-equipped to cope with the flood of cases. When the state's chief minister, Nitish Kumar, arrived the worst-hit district of Muzaffarpur on Wednesday, he was confronted by angry, grieving parents.

The situation has since improved, said Kishore. The government has deployed advanced life-support ambulances, while health workers have begun house-to-house outreach programs to detect potential patients and bring them to hospitals, he said.

About 122 children have been died in Muzaffarpur - the epicentre of crises - including 102 in a government hospital, said Kishore. With deaths from other districts, the toll now stands at 140, he said.

Eight additional advanced life-support ambulances have been deployed by the government for transportation of critical patients in the affected districts with teams of pediatricians and paramedics, Union  Health Minister Harsh Vardhan said in a statement released Thursday.

The Bihar government's handling of the outbreak - which has been occurring each year for more than two decades - drew criticism from parents and experts.

"This is the fallout of a pathetic health system in Bihar," said Rajeev Ahuja, a development economist who was formerly with the Bill & Melinda Gates Foundation and the World Bank.

Health infrastructure in rural areas is dysfunctional and unable to respond to health crises, Ahuja said, adding government health spending is the lowest among Indian states and it lacks in an adequate health workforce. The government "should hire more health professionals, partner with private sector to improve conditions. But that doesn't happen here," Ahuja said.

In the lead up to the recent election, Prime Minister Narendra Modi pledged to provide health insurance to 100 million families to help them access good quality and affordable healthcare. A 2017 World Health Organisation report found spending on health pushed more than 52 million Indians below the poverty line.