Dear Katrina Kaif, You Didn't Have To 'Slow Down' For Ranbir Kapoor. We Made A List

Katrina Kaif says she made 'accidental mistakes' to 'slow down' so that Ranbir Kapoor could catch up. But Katrina, Ranbir Kapoor is a fabulous dancer too 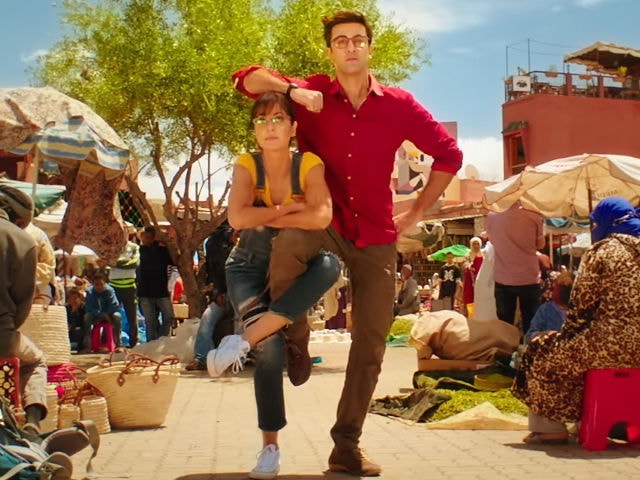 New Delhi: Katrina Kaif shared a behind-the-scenes snippet of her upcoming film Jagga Jasoos in which she said that she had to 'slow down' so that her co-star Ranbir Kapoor could catch up while they danced to the film's song Ullu Ka Patha. "I'm slowing down as much as I can so that Jagga (Ranbir Kapoor) can keep up with me," Katrina says in the video. Katrina said she made 'accidental mistakes' so that Ranbir 'would get his confidence back.' She said: "Sometimes you have to sacrifice, so the other person can come out stronger, so they get the confidence back, and then it brings the song on the same level. I think I'm generous enough to do that. So, I kept on making accidental 'mistakes' so that he would get his confidence back." But we think Ranbir Kapoor is as good a dancer as Katrina Kaif.

Katrina Kaif's skill as a dancer first came to light in Sheila Ki Jawani from 2010 film Tees Maar Khan, also directed by Farah. Since then, Katrina has impressed everyone with her absolutely fine dance moves in songs like Chikni Chameli, Kala Chashma and Kamli to name a few. But Ranbir Kapoor also has fabulous dance numbers to his credit - Badtameez Dil, Dilli Wali Girlfriend, Besharam, Matargashti.

Katrina Kaif's skill as a dancer was first fully uncovered by choreographer Farah Khan in Sheila Ki Jawani. That year Farah also choreographed Malaika Arora in Munni Badnaam Hui, which also went viral. Everyone knows the dancer Malaika is, and Katrina Kaif may not have outperformed Malaika but she ensured no one forgot her every time Munni was mentioned.


Next up, Katrina's Chikni Chameli in Agneepath. The murky setting of the dance number only upped Katrina's glamour quotient in the song. She was tutored by Ganesh Acharya and that says everything.


Katrina Kaif's swag in Dhoom: 3 song Kamli was off the charts. Sahir (Aamir Khan) has just one condition before Aaliya (Katrina Kaif) starts her act - that he should not be able to take his eyes off her. Katrina ensured all eyes on-and-off the screen were glued to Aaliya. Thank you, Vaibhavi Merchant for the excellent act.


Katrina Kaif's Kala Chashma was one for which everyone said 'Baar Baar Dekho.' The entire film's promotion was balanced on song as Katrina and Sidharth were spotted doing the song's hook step in different cities, trains, metro stations and trams. Bosco-Caesar really extracted the best out of Katrina and her co-star Sidharth Malhotra.


In Bang Bang! Katrina matched steps with Hrithik Roshan like a pro. In Fitoor she mesmerized with her perfect contemporary dance moves.

Katrina has many solo dance numbers like Sheila Ki Jawani, Chikni Chameli and Kamli while Ranbir generally performed in duets (most of them with Deepika Padukone). However, Ranbir's (almost) solo dance number - Badtameez Dil from Yeh Jawaani Hai Deewani - is easily his best performance ever. Badtameez Dil was choreographed by Remo D'Souza.


In Ae Dil Hai Mushkil, filmmaker Karan Johar capitalized on Ranbir's talent and shot a segment in which Ranbir danced to Sunny Leone's Baby Doll in which he incorporated Sunny's signature step along with Salman's towel dance and Hrithik's Ek Pal Ka Jeena hook step. The other specimen of his fabulous dance moves is Cutiepie.


Ranbir's dance Tamasha isn't ending any time soon. In Matargashti, Deepika and Ranbir danced goofily in the port and picturesque locales of Corsica. Matching Ranbir's finesse is one helluva task.


Ranbir's lesser popular dance songs are Tai Tai Phish and Besharam title track. Besharam was a disaster at many levels but the one relatively good thing that came out of the film was Ranbir's dance (though peculiar, he was fun to watch). Tai Tai Phish was Ranbir's special song appearance for Chillar Party.

Promoted
Listen to the latest songs, only on JioSaavn.com
And here's what happens when you put Katrina and Ranbir together in one song:


Ranbir Kapoor and Katrina Kaif have co-starred in Ajab Prem Ki Ghazab Kahani and Raajneeti. Their much-delayed film Jagga Jasoos releases on July 14. The film is directed by Anurag Basu.