An Improvised Explosive Device concealed in the road was set off by Maoists. BJP lawmaker Bhima Mandavi and 4 others were killed. 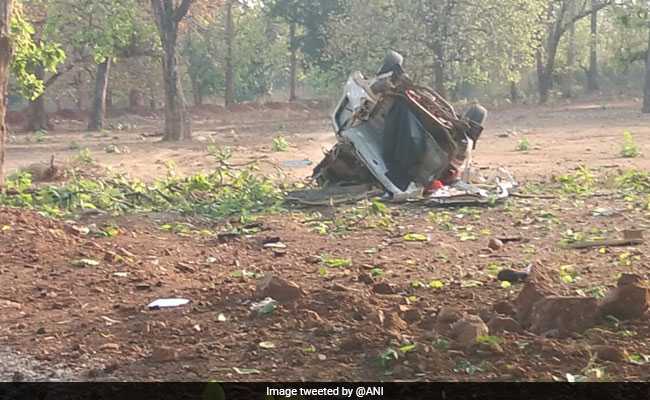 BJP lawmaker Bhima Mandavi was killed in a Maoist attack in Chhattisgarh.

Bhima Mandavi, the BJP lawmaker from Dantewada who was killed along with four police personnel by Maoists on Tuesday, had been asked to avoid going to Shyamgiri village in the district by the local police inspector but the lawmaker insisted on taking the route, a senior police officer has told NDTV. This was the lawmaker's third visit on the route for campaigning for the general elections that begin on Thursday.

A WhatsApp chat between the Superintendent of Police, Dantewada and an inspector at the Bacheli police station, claims the local cop had warned the lawmaker from taking the route, telling him Maoists had put up posters and banners.

However, the lawmaker told the inspector that "if anything happens, it will be my responsibility", according to the WhatsApp chat between the two policemen.

Not long after the exchange between the two policemen, the bulletproof vehicle of the lawmaker had been blown up by Maoists near Shyamgiri village, barely 200 metres from where Bhima Mandavi had stopped to address villagers. He was being escorted by just two vehicles.

When asked if the police knew about the movement of the lawmaker through the Maoist-affected area, why was additional police cover not provided to him, Superintendent of Police Abhishek Pallava told NDTV that there just wasn't enough manpower.

"There were only 12 policemen in the Bacheli police station and it would have posed a security risk. So the lawmaker was asked to avoid the area, but he insisted on going to Shyamgiri Hills," the police officer told NDTV.

On Monday, Bhima Mandavi passed through the same route but that day, de-mining exercise was done by security forces and he was escorted by an additional team of DRG. On Tuesday too, the lawmaker was being escorted by additional security of 50 personnel on 25 motorcycles, during his poll campaigning.

But the lawmaker insisted that the security be withdrawn as he had completed his campaigning for the day, the Superintendent of Police said.

The distance between Bacheli and Kuwakonda (where the lawmaker was headed) is 14 km and the strike took place four km ahead of Kuwakonda police station.

It is suspected that at least 100 Maoists were involved in the attack on the BJP lawmaker.

"According to ground inputs, it was a pre-planned attack as a large number of armed cadres could not gather in such a short span of time. It could have been a trap laid for the MLA," the police officer said.

Maoists had warned the locals not to vote in the election - posters carrying their message dot the area.

The Bastar area of Chhattisgarh, where Dantewada is, will vote on Thursday as part of the first phase of general elections. Results will be declared on May 23.