Bhim Mandavi, his three Personal Security Officers or PSOs and the driver of the SUV they were travelling in, died on the spot.

With less than 24 hours remaining for the first phase of voting in the national election, BJP lawmaker from Dantewada Bhima Mandavi had wrapped up campaigning for the day and was travelling in a three-car convoy from Bacheli to Kuwakonda in the Maoist-hit district in Chhattisgarh on Tuesday afternoon. As the convoy made its way through Shyamagiri Hills, a thick forested and deserted area about 350 km from state capital Raipur, the lead car carrying Mr Mandavi was suddenly ripped apart in an explosion. It had crossed over an Improvised Explosive Device or IED planted under the tarmac by Maoists.

Mr Mandavi, his three Personal Security Officers or PSOs and the driver of the SUV they were travelling in, died on the spot.

Such was the impact of the blast that the bulletproof SUV the lawmaker was travelling in was thrown in the air and split into two. Photos and videos from the site show mangled remains of the reinforced vehicle. 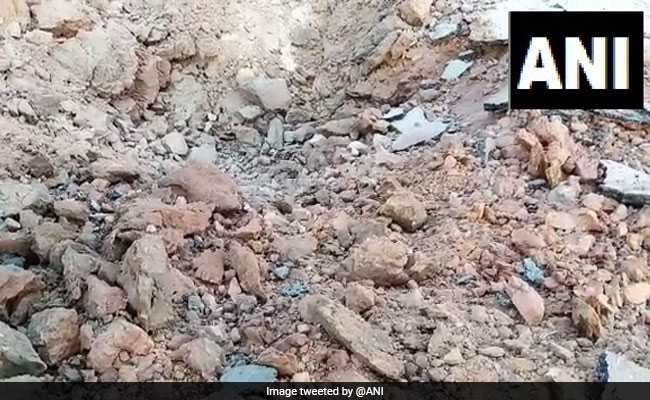 The blast left behind a four-foot deep crater in the middle of the road.

"BJP MLA Bhima Mandavi, his driver and 3 PSOs have lost their lives. Bacheli Police Station in charge had informed the BJP MLA that adequate security was not present on the route near Kuakonda and that he should not go there," Special DG (Anti-Maoist Ops) DM Awasthi said.

The blast also left behind a four-foot deep crater in the middle of the road.

A local journalist told NDTV that Maoists used at least 20 kg of explosives in the attack.

"Maoists dig a tunnel and then plant the explosives under the road," journalist Vikas Tiwari said.

Right after the explosion, Maoists also opened fire on the convoy and an exchange for fire continued for at least a half an hour. The other security personnel in the convoy had to retreat and the Maoists made way with the weapons of the killed PSOs.

Maoists have warned the locals not to vote in the election - posters carrying their message dot the area. In view of the lack of adequate security on the route, the local police had asked the lawmaker against making the journey, but he wished to get his message across to the people, sources said.