Cyclone Tauktae: The cyclone is expected to bring rains Rajasthan, Uttarakhand, Himachal Pradesh, UP and Delhi, said the weather office. 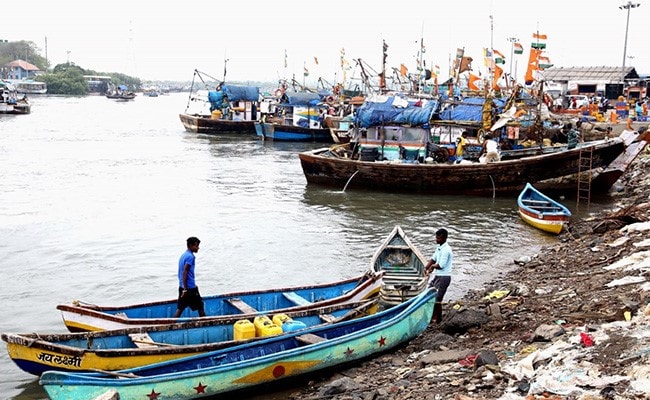 The landfall process of the eye of cyclone Tauktae ended around Monday midnight. (FILE)

Prime Minister Narendra Modi will visit Gujarat and Diu on today to personally review the situation there and the damage wrought by cyclone Tauktae. PM Modi will leave New Delhi around 9:30 am and land at Bhavnagar, from where he will proceed for an aerial survey of Una, Diu, Jafarabad, and Mahuva. He will also hold a review meeting at Ahmedabad.

Cyclone Tauktae weakened into a "depression" and lay centred over south Rajasthan and adjoining Gujarat region on Wednesday morning, the India Meteorological Department said.  After causing widespread rain in Gujarat, the cyclone is expected to bring showers in many other states also, including Rajasthan, Uttarakhand, Himachal Pradesh, Uttar Pradesh and Delhi, due to its interaction with the western disturbance, the IMD said.

At least seven people were killed in Gujarat as the cyclone battered parts of the state and left behind a trail of destruction along the coast, uprooting electric poles and trees, and damaging several houses and roads, officials said.

Gujarat Chief Minister Vijay Rupani said that despite such a high-intensity cyclone hitting the state, his government managed to prevent any major loss to life or property as over two lakh people were already shifted to safer places.

Here are the highlights on Cyclone Tauktae:

May 19, 2021 09:06 (IST)
Light to moderate intensity rain in Atrauli, Jattari, Khurja, Jajau, Agra, Muzaffarnagar, Bijnor, Mathura, Raya, Barsana, Nandgaon (UP); Viratnagar, Kotputli, Khairthal, Bhiwari, Mahandipur Balaji, Mahawa, Nadbai, Nagaur, Alwar, Bharatpur, Deeg(Rajasthan) during next 2 hours: IMD
May 19, 2021 04:38 (IST)
Cyclone Tauktae To Weaken Gradually In Next Few Hours: Weather Office
Cyclone Tauktae will move North-Northeastwards and weaken gradually into a deep depression in the next three hours, informed the India Meteorological Department on Wednesday.
While the Indian Navy continues to carry out its rescue operations near the Western coastline, the meteorological department in a tweet informed, "Deep Depression (Remnants of Tauktae) over Gujarat region lay centered at 2330 hours IST of the 18th May, 2021 is about 110 km north-northeast of Ahmedabad. It is likely to weaken gradually into a Depression during next 06 hours."
May 19, 2021 02:25 (IST)

Deep Depression (Remnants of Tauktae) over Gujarat region lay centered at 2330 hours IST of the 18th May, 2021 is about 110 km north-northeast of Ahmedabad. It is likely to weaken gradually into a Depression during next 06 hours. pic.twitter.com/SPZHYPdqnt

Western Navy Commander MK Jha About Rescue Ops During Cyclone Tauktae
West Naval Command head, MK Jha, describes the Navy's efforts and challenges during Cyclone Tauktae in rescuing lives."
May 18, 2021 22:59 (IST)
Ahmedabad airport ops suspended for seven hours due to cyclone
The Ahmedabad airport suspended its operations for seven hours on Tuesday as a precautionary measure due to cyclone Tauktae, an official said. The airport resumed operations at 5 on early Tuesday morning after remaining shut from 7.30 pm on Monday. But the operations were again suspended at 3 pm as the cyclone brought heavy winds and rain to the city.
The operations resumed at 10 pm. The cyclone made landfall on the Gujarat coast on Monday night and proceeded as a very severe cyclonic stormbefore weakening gradually.
May 18, 2021 22:37 (IST)
Cyclone: 29 persons aboard three vessels rescued in Mumbai
At least 29 persons aboard three vessels which went adrift due to cyclone Tauktae in the Arabian sea were rescued jointly by the Mumbai Police, CISF and Mazagaon Dock Shipbuilders near Angre jetty in Mumbai on Tuesday, officials said.
All the three vessels- two of them fishing boats- went adrift in the sea after their anchors broke in the cyclone they said.
MV Saraswati and MV Kajal with 22 people on board went adrift near Mazagaon Dock Limited (MDL), an official said. MV Saraswati is a shipping survey boat of the Central government, he said.
May 18, 2021 21:29 (IST)
PM Modi To Visit Gujarat, Diu Tomorrow To Review Cyclone Tauktae Damage
Prime Minister Narendra Modi will visit Gujarat and Diu tomorrow to review the damage caused by Cyclone Tauktae that swept across the country's western coast yesterday and made landfall on the coast of his home state late in the night.
The storm has led to several deaths and damage over the past many hours, forcing the country to call in its security forces to help with rescue and salvage operations.
May 18, 2021 20:27 (IST)
After-effects of Cyclone Tauktae: IMD says Delhi-NCR, parts of north India to receive rains
As Cyclone Tauktae weakens further, its after-effects will bring moderate rains to several parts of north India, including Delhi-NCR, over the next two days, the India Meteorological Department (IMD) said on Tuesday.
Kuldeep Srivastava, Head of the Regional Meteorological Centre of the IMD, said Cyclone Tauktae has brought rains to southern Rajasthan as it approaches north India.
"Tomorrow, it will stretch from Rajasthan to Haryana. Due to this, east and west Uttar Pradesh, east Rajasthan, the Delhi-NCR region will witness moderate rain. There is a possibility of heavy rains in some parts of Delhi," Mr Srivastava said.
The IMD has issued an orange colour-coded warning for National Capital Region (NCR) for Wednesday with a forecast of rains and squally winds of 50-60 kilometres per hour.
The weakened cyclonic circulation will also move to Uttarakhand and bring rains to the state along with Himachal Pradesh during the next two days, he added.

May 18, 2021 19:25 (IST)
Naval Ships Beas, Betwa and Teg joined INS Kochi and Kolkata for undertaking Search and Rescue (SAR) operations for Barge P-305, which sank 35 nautical miles from Mumbai (in the Mumbai Offshore Development Area) SAR has also been augmented with P8I and naval helicopters, who continue to undertake aerial search in the area.

In another operation, a Navy Seaking helicopter was launched to rescue crew of GAL Constructor, which ran aground North of Mumbai. The helo rescued 35 crew members of GAL Constructor.
May 18, 2021 18:29 (IST)
Huge Rescue Ops After Cyclone Tauktae Sinks Barge, Leaves Oil Rig Adrift
Navy vessels, tug boats and rescue ships were pressed into service on Monday to evacuate over 500 people stuck on an oil rig and barges in the high sea off the Mumbai coast after Cyclone Tauktae ripped through it.
The cyclone sank a barge that had living quarters for employees working offshore, while two other construction barges lost anchors and drifted away.
The three barges, which were deployed by Afcons for a contract the company had got from ONGC, had 599 workers on board when the cyclone hit, official sources said.

When the landfall process of the cyclone began on the Gujarat coast around 9 pm on Monday, Rupani reached the SEOC, a central control room in Gandhinagar, to take stock of the situation and guide the administration, it said.
May 18, 2021 15:47 (IST)

Goa: A NDRF team clears road after trees uprooted at Monte hill area near Margao, due to strong wind and rain#CycloneTauktaepic.twitter.com/uBGwCqlBVJ

May 18, 2021 14:03 (IST)
Isolated heavy rain likely in Ahmedabad and some other dists: Manorama Mohanty, MET, Ahmedabad

SEVERE CYCLONIC STORM 'TAUKTAE' WEAKENED INTO A CYCLONIC STORM AND LAY CENTRED AT 1130 HRS IST OVER SAURASHTRA, NEAR LAT. 22.0°N AND LONG. 71.5°E, ABOUT 165 KM SOUTHWEST OF AHMEDABAD. TO MOVE NORTH NORTHEASTWARDS AND WEAKEN GRADUALLY INTO A DEEP DEPRESSION IN NEXT 06 HRS. pic.twitter.com/rIPcCNG39I

May 18, 2021 13:39 (IST)
Cyclone Tauktae: Worst is over, says NDRF chief
The National Disaster Response Force (NDRF) Director General SN Pradhan on Tuesday said that the ''worst is over'' and Cyclone Tauktae will "become a depression" by today evening.
Pradhan said, "The cyclone has weakened into a cyclonic storm level and probably in another couple of hours it will become a cyclonic system which is a much lower category. By the time it reaches Gujarat coast in the late evening, it would have become a depression...The worst is over"
"Another good news is that the state emergency operation centre (SEOC) of Gujarat has informed us and confirmed that there have been no deaths at all," he further said adding that there is considerable damage to property and infrastructure.
"Initially there were reports in the morning of hundreds of villages losing electricity but within an hour the electricty has been restored. These are good signs of the disaster response capabilities of India and the states. It will take some more time to complete the restoration," Mr Pradhan said.
May 18, 2021 13:10 (IST)

The state emergency operation centre (SEOC) of Gujarat has informed us and confirmed that there have been no deaths at all: NDRF Chief SN Pradhan on #CycloneTauktaepic.twitter.com/4d60mjr01p

#HarKaamDeshKeNaam
All in a day's work!!
Even as some #IndianNavy ships continue to engage with multiple #SAR missions off West Coast of India in wake of havoc wreaked by #CycloneTauktae, others progress with next phase of Op #SamudraSetu_II. @indiannavy@SpokespersonMoD
(1/2) pic.twitter.com/UdpUiCWTkf