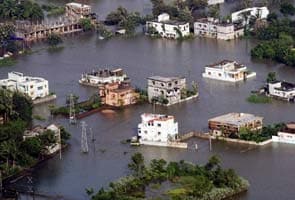 Bhubaneswar: Relief and restoration work was stepped up today in areas ravaged by twin calamity of Cyclone Phailin and resultant floods in Odisha which affected over 1.2 crore people in more than 16,000 villages and claimed 26 lives.

Of 26, five people died in floods.

Cyclone and floods had affected around 1.2 crore people in 16,487 villages of 2009 gram panchayats and 43 urban local bodies spread over 148 blocks of the state, he said.

While standing crops over 6,25,408 hectare area had been destroyed, 3,33,070 houses were damaged due to both the calamities, the minister said.

Stating that more than 9.9 lakh people had been evacuated ahead of the cyclone that made a landfall at Gopalpur in Gajnam district on Saturday night, Mr Patro said 1,12,241 people were evacuated in flood-hit areas.

Though water level in the river Budhabalang was receding in Bahanaga, Aupada, Simulia, Nilagiri and Soro areas of Balasore district, the flood situation was still grim in Basta, Bhogarai, Jaleswar and Baliapal areas where river Subarnarekha was in spate.

The number of marooned persons has come down from over 2.5 lakh yesterday to around 75,000 - 68,000 in Balasore and 7,000 in Jajpur districts, Special Relief Commissioner P K Mohapatra said.

Promoted
Listen to the latest songs, only on JioSaavn.com
Air dropping of food packets was stopped in view of substantial wastage and relief materials is now being sent by boats to flood-hit areas, he said.