Cyclone Burevi: The weather office has forecast heavy to very heavy rainfall for Chennai and southern Tamil Nadu on Friday. 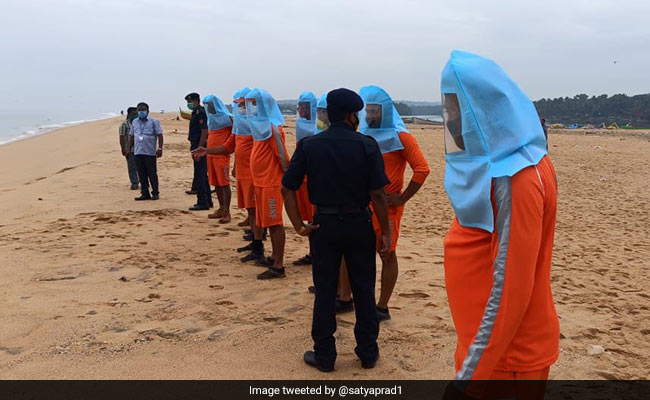 The IMD has already issued a red alert for south Tamil Nadu and south Kerala.

Southern Tamil Nadu and neighbouring Kerala are on high alert as the cyclone Burevi which weakened into a deep depression inches closer to the southern shores. The deep depression is likely to cross Ramanathapuram and adjoining Tuticorin district in six hours with windspeed of 50-60 kmph, according to the weather office. Flight operations in two airports in Tamil Nadu have been suspended as a precautionary measure.

The India Meteorological Department (IMD) had earlier predicted that cyclone Burevi, which crossed the Sri Lanka coast on Wednesday night, would hit the Tamil Nadu coast as a cyclonic storm.

"Deep Depression over Gulf of Mannar at 0530 IST today is close to Ramanathapuram District coast remained practically stationary, about 40 km southwest of Ramanathapuram, 70 km west-southwest of Pamban. The associated wind speed is about 55-65 gusting to 75 kmph," IMD said in its latest update. Deep depression is a stage of cyclone formation or de-intensification.

The deep depression is very likely to further weaken into a depression (with a wind speed of 40-50 kmph, gusting up to 60 kmph) in 24 hours, it said.

Deep Depression over Gulf of Mannar at 0530 IST today is close to Ramanathapuram District coast remained practically stationary, about 40 km southwest of Ramanathapuram, 70 km west-southwest of Pamban . The associated wind speed is about 55-65 gusting to 75 kmph. pic.twitter.com/UTnITPHjjB

The IMD has issued a number three hazard warning sign at the Pamban port due to strong winds blowing at a speed of 55 kmph over the coast.

The weather office has forecast heavy to very heavy rainfall for Chennai and southern Tamil Nadu on Friday under the influence of cyclone Burevi, with authorities deploying NDRF teams and setting up relief camps as disaster-response measures in view of the storm's impending landfall along the state's southern coast.

The Kerala government has declared a holiday in five districts. Over 2,000 relief camps have been opened in Kerala, it said. A statement issued by the state government said a public holiday has been declared for the districts of Thiruvananthapuram, Kollam, Pathanamthitta, Alappuzha and Idukki in the state.

In a relief to the state, the Met department has withdrawn the red alert issued for the cyclone and rains in the seven southernmost districts.

"It is very likely to weaken further into a depression (wind speed 45-55 kmph gusting to 65 kmph) during next 12 hours," IMD said.

It has issued yellow alerts for the districts of Thiruvananthapuram, Kollam, Pathanamthitta, Alappuzha, Kottayam, Ernakulam, Idukki, Thrissur, Palakkad and Malappuram.

Flight operations at the Trivandrum international airport, which were initially suspended, will resume from 4pm today, officials said.

On Thursday, Home Minister Amit Shah spoke to Tamil Nadu Chief Minister Edappadi Palaniswami and his counterpart in Kerala Pinarayi Vijayan and assured them of all possible help to the people of both the states.

Diving and disaster relief teams from the Indian Navy and the National Disaster Response Force continue to be on standby to render necessary support to the administration.