The ruling TMC, however, refused to attach any importance to either Amit Shah's rath yatras or events organised by the opposition, saying people of the state were firmly with Chief Minister Mamata Banerjee. 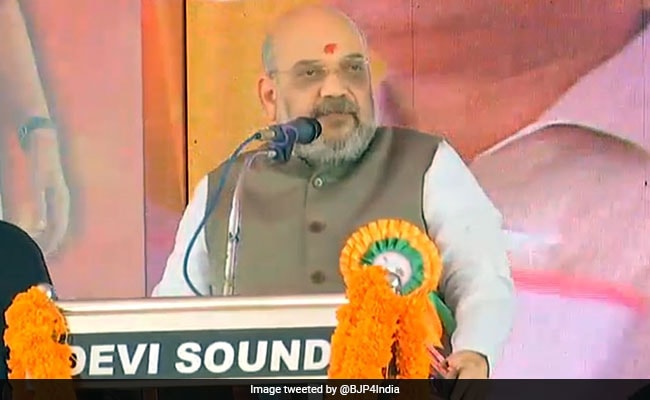 Amit Shah will have three rath yatras in the state from December 5-9.

In a bid to counter BJP chief Amit Shah's 'rath yatras' in Bengal ahead of next year's Lok Sabha polls, opposition Congress and the CPI(M) have decided to take up mass contact programmes and 'padayatras' (foot marches) in the state.

The ruling TMC, however, refused to attach any importance to either Mr Shah's rath yatras or events organised by the opposition, saying people of the state were firmly with Chief Minister Mamata Banerjee.

The BJP, which is trying to make inroads in Bengal, stood second to the Trinamool Congress in the local body polls held recently. The saffron party has emerged as the principle challenger to TMC, leaving its two traditional rivals -- the Congress and CPI(M) -- fuming.

The state Congress, on its part, has decided to launch 'Jan Samparak Abhiyan' (mass contact) programme across the state, as part of a nationwide initiative, likely from the end of next month, party sources said.

The CPI(M) leadership under the banner of its farmer wing - Kisan Sabha - has announced three foot marches from Singur in Hoogly district, Coochbehar district and Farakka in Murshidabad district, sources in the party said.

According to the sources in both parties, these programmes will clash with the timing of the three rath yatras of Mr Shah in the state from December 5-9, and are aimed at countering it.

West Bengal Congress president Somen Mitra said the 'Jan Samparak Abhiyan' is targeted at reaching out to the masses with the objectives of the party and highlight the "corruption, communal politics and misrule" of the Narendra Modi government.

"In every district, blocks and booths of the state, our party workers will reach out to the masses and communicate our vision. We will also raise a donation of Rs 2 to Rs 5 from every household for the party. Through these activities, we will strengthen our party organisation," Mr Mitra told PTI.

Asked whether the outreach programmes are aimed at countering Mr Shah's rath yatras, Mr Mitra said, "Our programme is part of  nationwide campaign of AICC. We are not competing with anyone, but yes, the Congress will oppose any sort of communal or divisive politics of the BJP and during our mass contact programme, we will speak out against it".

CPI(M) politburo member and Kisan Sabha general secretary Hannan Mollah said apart from various issues related to farmers, including the land policy of the TMC government, the party will propagate against the communal politics of the BJP.

"It is obvious that when the CPI(M) is organising a programme, we will speak out against communal politics and will advocate in favour of unity of masses to defeat the BJP and divisive forces. During our padayatras too, we will do the same," Mr Mollah told PTI.

"It is also obvious that Amit Shah during his rath yatras will try to create communal polarisation in the state in order to reap benefits in the Lok Sabha polls. We will fight tooth and nail against it," he said, adding, the first foot march will start from Singur on November 28.

"We will highlight the anti-farmer policies of the state and central governments. Farmers' distress, agricultural loans and lies of the TMC government regarding the issue of Singur and its land policy will be raised during our programmes," Mr Haldar said, and claimed that the campaigns are not aimed at the rath yatras of the BJP.

Reacting to the proposed mass contact programmes, BJP Bengal president Dilip Ghosh said both the parties were "spent force" in state politics, and people were looking up to the saffron party to fight against the misrule of the TMC government.

"We are not bothered about what the Congress and the CPI(M) are planning. In the last panchayat polls and several by-elections, it has been proved that the BJP is the only alternative to the TMC in Bengal," Mr Ghosh told PTI.

TMC secretary-general Partha Chatterjee said neither the rath yatras of the BJP nor the outreach programmes of the Congress and the CPI(M) would yield any result, as the people of Bengal stand together with the CM.

The BJP chief will kick-off his rath yatra in Bengal, starting December 5, from the temple town of Tarapith in Birbhum district. The yatras will cover all the 42 Lok Sabha constituencies of the state.

The second and third rath yatras will start from Coochbehar district in north Bengal and Gangasagar in south Bengal on December 7 and 9, respectively. Each rath yatra will cover 14 Lok Sabh constituencies.

The tableau of these rath yatras will stop at various places for public meetings and interactions. The three yatras will span across 40 days, and will be followed by a massive rally in Kolkata at the end of January or the beginning of February.

Mr Shah has set a target of winning 22 seats from Bengal in the next Lok Sabha polls. The party presently has two Lok Sabha seats -- Asansol and Darjeeling.

The CPI(M) and the Congress at present have two and four Lok Sabha seats, respectively, in the state.