Cow Bunks Exam in Jammu and Kashmir, Despite Having Admit Card 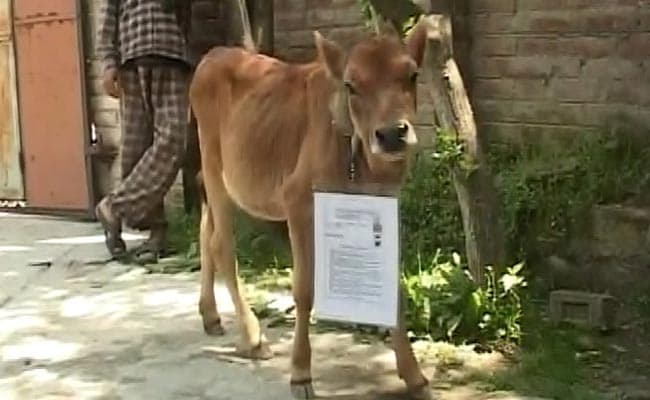 Srinagar: A Budgam resident, who managed to get hall ticket for his brown cow to write a professional entrance examination, today did not turn up with the bovine for the paper at the allocated centre here, saying he only wanted to convey a message about the "flaw" in the system.

"I only wanted to convey a message to the authorities about the flaw in the system. I never wanted to make a mockery of the system," Abdul Rashid Bhat, the owner of the now-famous cow, told PTI.

Mediapersons had gathered outside the Government Degree College at Bemina, where the exam was scheduled to take place at 10 am, but returned disappointed when Mr Bhat and his cow did not turn up for the examination.

In an attempt to expose the loopholes in Jammu and Kashmir Board of Professional Entrance Examinations' (BOPEE) online registration system, Mr Bhat had managed to acquire an admit card for his cow to write the paper for admission to a diploma course in a polytechnic college.

The admit card was issued by the BOPEE in the name of Kachir Gaaw, literally 'brown cow', supposedly the daughter of Gura Dand, literally 'red bull'.

Mr Bhat, after obtaining the hall ticket last week, had said it was his legal right to bring the bovine to write the examination.

"Had I gone ahead with that, there would be no difference between me and an animal. I would become a two-legged animal then," he said.

Mr Bhat, who hails from the Chadoora area of central Kashmir's Budgam District, expressed hope that the prank he played would lead to change in the system and authorities would make it more efficient and fair for all candidates.

"There is a general perception that examinations are conducted as a formality, and the admissions are finalised before the process is started. I hope things will improve and meritorious students only will get admissions to professional courses," he added.

The cow was alloted a seat at Government Degree College Bemina for writing the examination scheduled for today.

Promoted
Listen to the latest songs, only on JioSaavn.com
The incident came to light on May 2, after opposition National Conference spokesperson Junaid Azim Mattu uploaded a copy of the admit card on micro-blogging site Twitter.

BOPEE chairman Ghulam Hassan Tantray has ordered an inquiry into the incident.