The pandemic has stretched the country's already ramshackle health infrastructure to near breaking point, highlighting every fault-line that already existed. 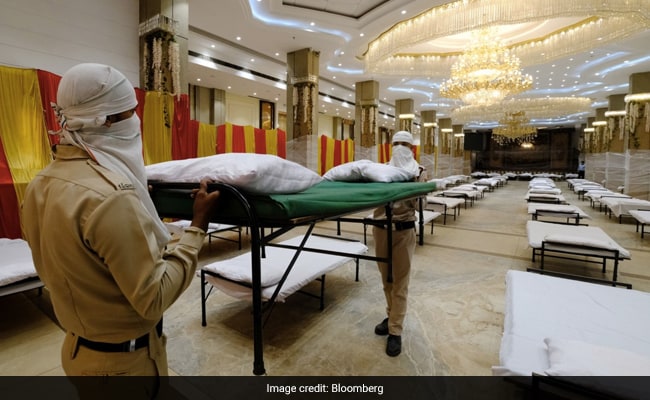 Civil defense members carry a bed in a makeshift ward at a Covid-19 quarantine center in New Delhi.

In late June, Mr Shah said India had seen much fewer deaths from the virus than the global average and other nations like the U.S., Brazil and the U.K. That showed a "country like India, even when compared to developed countries, has fought this fight very well," he told New Delhi-based Asian News International in an interview.

Officially India's death rate is nearly 20 times lower than the U.S., even though it has the world's fastest growing epidemic and the third highest number of total cases -- now including Amit Shah, who confirmed on Sunday that he was hospitalised with the virus. But independent experts are warning India has failed to properly record fatalities, and say better data collection is needed if the country is going to get a handle on the epidemic.

"The problem is a mix of poor data culture and a bloated, corrupt bureaucracy," said Steve H. Hanke, professor of Applied Economics and the founder and co-director of the Johns Hopkins Institute for Applied Economics, Global Health, and the Study of Business Enterprise at the Johns Hopkins University in Baltimore, pointing to a report by the Carnegie Endowment for International Peace.

"Missing or low-quality data are always a major problem when attempting to form public policy in the health -- or any other -- field," he said. "It's equivalent to the pilot of an aircraft flying blind." 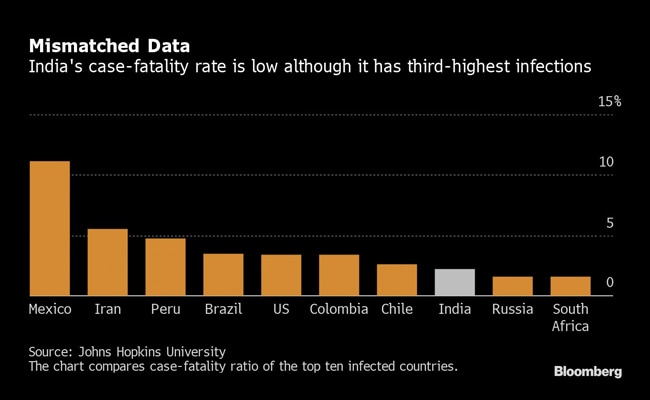 Bloomberg contacted officials in the capital New Delhi, the financial hub Mumbai and the southern industrial center of Chennai to obtain data for total deaths in each month from March to July for 2019 and 2020. Figures from Chennai showed overall deaths this year were higher than last year, with a spike in June, while Mumbai provided two different data sets that couldn't be compared. Multiple calls to municipal corporation officials in Delhi yielded no data.

India's death registration data was patchy even before the virus struck. The vast majority of deaths, especially in rural villages, take place at home and routinely go unregistered. For others the cause of death listed is often anodyne -- old age or heart attack. Experts believe that only between 20%-30% of all deaths in India are properly medically certified.

The pandemic has stretched the country's already ramshackle health infrastructure to near breaking point, highlighting every fault-line that already existed. Data collection is a prime example. Covid-19 data from the federal and state governments is either without any breakdown of gender and age -- crucial when assessing the impact of disease -- or lacking comparisons with deaths recorded over similar periods in previous years. For now, India's infections show no signs of peaking. Last week the country was adding more than 50,000 infections almost every day, while cities and states that appeared to have the epidemic under control are reporting grim stories of overwhelmed hospitals. Given India's testing rate is one of the lowest in the world among hard hit countries, experts say the true extent of its epidemic is likely far higher than official data indicates.

The Ministry of Health and Family Welfare didn't respond to requests for comment.

Last week, Tamil Nadu once again revised death data -- this time for the entire state -- adding more than 400 deaths from March to June. There have been a slew of news reportsabout other cities ignoring the death reporting guidelines of the main medical research organization, the Indian Council of Medical Research, that state all 'suspected' Covid-19 deaths should be included in the death tally.

"Mortality data are essential as they provide unbiased estimates of the trends in Covid deaths," said Prabhat Jha, professor of Global Health and Epidemiology at the Dalla Lana School of Public Health, University of Toronto. Jha is one the leading experts on India's mortality data and the chief investigator of the Million Death Study in India. "Data are the best way out of the epidemic," he said, urging governments "to release a lot more data quickly on cases, deaths and hospitalizations."

Missing death data will worsen as the virus sweeps through India's villages, said T. Sundararaman, a New Delhi-based global coordinator of the People's Health Movement, an organization which brings together local activists, academics and civil society groups working on public health. The problem with under-reporting virus deaths is compounded by all the delays in how data is collected and travels through India's bureaucracy, he said, as well as the time between infection and death.

"The mortality data released today relates to the cases of infections reported 15 days back -- in those 15 days we've added 500,000 new cases," Mr Sundararaman said in a telephone interview. "We're looking at the current number of deaths by the current number cases" instead of dividing by the cases from two weeks ago. "In which case our mortality rate will actually rise to 6% which is where I think it should be -- at about 4% to 6%."

"All these deaths that are missed, all these cases that are missed are clusters in the making," he said. "The real problem is that you're failing to follow a properly data driven public health policy."

India's poor quality of health data is a symptom of its overrun public health system.

As the disease progressed every infection-hit city or state began to announce additional hospital beds for Covid-19 patients. Tens of thousands of beds were added -- yet there was no explanation of how these beds were being medically staffed.

Setting up beds is easy, but there is no point unless you have the extra staff to care for the patients in those beds, the managing director of a prominent private hospital in north India said, asking not to be identified citing privacy concerns. In the end, India's mortality rates will be among the highest in the world, the director said, offering a lesson in how not to manage a pandemic.

It's a gap Sundararaman also notes. "We've increased the beds but the recruitment is not on pace. Nurses, paramedics, lab technicians -- we need to provide jobs now."