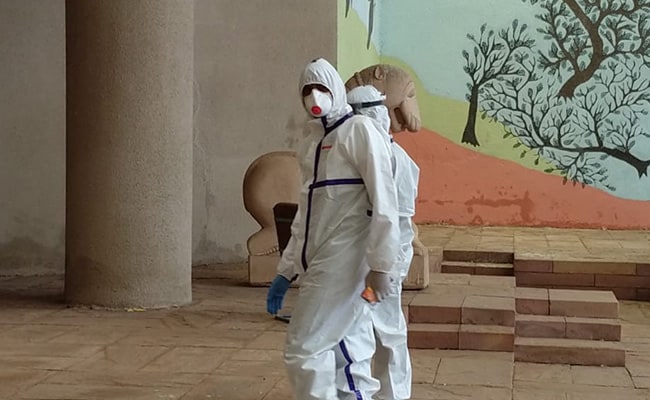 The coronavirus pandemic did not stop a Congress MLA in Madhya Pradesh from voting in the elections to 24 Rajya Sabha seats today. Covered from head to toe in a white protective jumpsuit, Congress MLA Kunal Chaudhary was among the last leaders who turned up to vote at the state assembly in Bhopal.

His turn to vote came after at least 205 MLAs had already cast their votes. Mr Chaudhary, wearing personal protective equipment or PPE suit and carrying a mobile phone in his hand, walked into a room to cast his vote.

Around him people stood in a distance to minimise the risk of getting infected as the virus is known to spread from respiratory droplets.

The MLA said he felt unwell on June 6 and got tested four days later. The report that said he was positive came on June 12.

"I reached Vidhan Sabha around 12.45 pm in an ambulance, with full precaution wearing a PPE kit, the officials were also wearing PPE kit, though I felt they were a bit scared, which is natural. I voted for my party candidate and came back," the MLA told NDTV.

The Congress MLA replied, "People who can't even win Panchayat elections are questioning me, they should ask the question from their party leaders who are running the government."

The voting for elections to 24 Rajya Sabha was held today after most of them were put on hold since March due to the pandemic. The build-up to the elections, in which seats from 10 states are at stake, was marked by a resurgence of resort politics, resignations, switching sides and allegations of bribery.