Elections to most Rajya Sabha seats were put on hold since March due to the coronavirus pandemic. 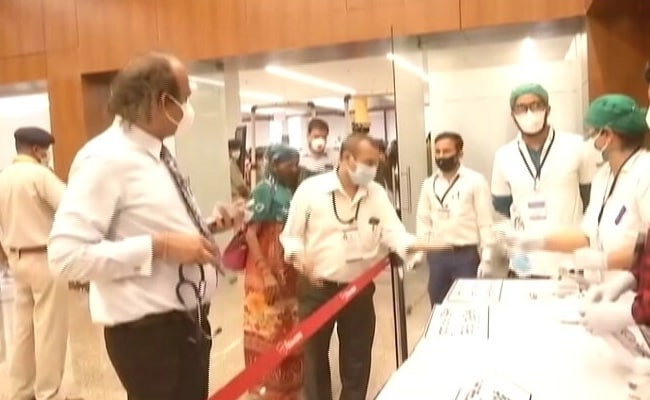 The Election Commission has made elaborate arrangements for the voting in view of the pandemic.

The Congress has won two of three Rajya Sabha seats in Rajasthan, while the BJP won the third in the biennial election held on Friday. In Madhya Pradesh, the score was flipped where the ruling BJP won two and Congress one. The build-up to the elections, in which 24 seats from 10 states were at stake, was marked by a resurgence of resort politics, resignations, switching sides and allegations of bribery.

Here are the Updates on Rajya Sabha elections:

Jun 20, 2020 01:52 (IST)
BJP Wins 3, Conress 1 In Gujarat
Abhay Bhardwaj, Ramilaben Bara and Narhari Amin from the BJP and Congress's Shaktisinh Gohil won the election in Gujarat. The Congress party had also fielded Bharatsinh Solanki for a second seat but he lost. Counting of votes for four seats in Gujarat was delayed as the Congress demanded that the Election Commission scrap two BJP votes on different grounds.

Jun 19, 2020 19:52 (IST)
Rajya Sabha Polls: BJP-Congress 2-1 In Madhya Pradesh, 1-2 In Rajasthan
The ruling Congress won two of three Rajya Sabha seats up for voting in Rajasthan while the BJP won the third in the biennial election held on Friday. The score was flipped in Madhya Pradesh where the ruling BJP won two and Congress one. The outcome for the closely-watched contest in Gujarat is still awaited. The build-up to the elections, in which 24 seats from 10 states were at stake, was marked by a resurgence of resort politics, resignations, switching sides and allegations of bribery.

KC Venugopal and Neeraj Dangi of the Congress and Rajendra Gehlot of the BJP were elected to the upper house from Rajasthan without any cross-voting. The BJP had fielded a second candidate as well, Onkar Singh Lakhawat, but he lost.With this, the number of Congress party's tally in the Rajya Sabha from Rajasthan has increased to three, out of a total of 10. The other seven are BJP members.

In Madhya Pradesh, Jyotiraditya Scindia and Sumer Singh Solanki were elected on BJP tickets while Digvijaya Singh won from the Congress. The other Congress candidate, Dalit leader Phool Singh Barriya, lost the election. Samajwadi Party MLA Rajesh Shukla was expelled by his party for voting for the BJP.
Jun 19, 2020 19:05 (IST)
Breaking News: Congress Wins Two Seats In Rajasthan In Rajya Sabha Polls, BJP One
The ruling Congress has won two of three Rajya Sabha seats up for voting in Rajasthan, while the BJP won the third on Friday. Congress' KC Venugopal and Neeraj Dangi are set to enter Rajya Sabha, while from the BJP, it wil be Rajendra Gehlot who will enter the Upper House. Read More

Jun 19, 2020 18:30 (IST)
Congress MLA Who Has Coronavirus Votes In PPE Suit For Rajya Sabha Polls
The coronavirus pandemic did not stop a Congress MLA in Madhya Pradesh from voting in the elections to 24 Rajya Sabha seats today. Covered from head to toe in a white protective jumpsuit, Congress MLA Kunal Chaudhary was among the last leaders who turned up to vote at the state assembly in Bhopal.

His turn to vote came after at least 205 MLAs had already cast their votes. Mr Chaudhary, wearing personal protective equipment or PPE suit and carrying a mobile phone in his hand, walked into a room to cast his vote. Read

4. BJP sources claim that as many as seven congress MLAs have cross voted in their favour

5. Hearing continues at Manipur High Court over urgent petition that Congress had filed over the Speaker's actions
Jun 19, 2020 15:26 (IST)

Our heartfelt condolences to the families and loved ones of the soldiers who lost their lives in #Galwan: German Ambassador to India Walter J. Lindner
(file pic) pic.twitter.com/ix3gJAqCFi

Jun 19, 2020 13:58 (IST)
Congress' internal disputes will come out after Rajya Sabha poll results: Gujarat Chief Minister
Gujarat Chief Minister Vijay Rupani said that the Congress has internal disputes and after the Rajya Sabha election results these will be out in the open.
The comments came at the state Assembly in Gandhinagar where he had gone to cast his vote. "The voting for Rajya Sabha elections has started. All the candidates of BJP will win. Congress knows that it will not win the election as their every strategy has failed and BJP''s all MLAs are together," Mr Rupani said.
Jun 19, 2020 13:32 (IST)

Madhya Pradesh: A Congress MLA who had tested positive for #COVID19, arrives at the state legislative assembly in Bhopal to cast his vote. Voting is currently underway for three Rajya Sabha seats of the state. #RajyaSabhaElectionpic.twitter.com/P8wltUu8fT

Meghalaya: Voting is underway for one seat of Rajya Sabha, at the state Assembly in Shillong. pic.twitter.com/t3WCoHRfYt

Jun 19, 2020 10:28 (IST)
Voting underway in Jharkhand
BJP MLA Biranchi Narayan from Jharkhand says Independent MLAs Saryu Rai and Amit Yadav have extended their support to the BJP. "We hope to get the support of 2 other MLAs. With 32 votes, we hope to send Deepak Prakash to Rajya Sabha."
Voting is underway for 2 Rajya Sabha seats at the state Assembly in Ranchi.
Jun 19, 2020 10:24 (IST)
Madhya Pradesh Chief Minister Shivraj Singh Chouhan casts his vote for Rajya Sabha Election at the state Assembly in Bhopal. 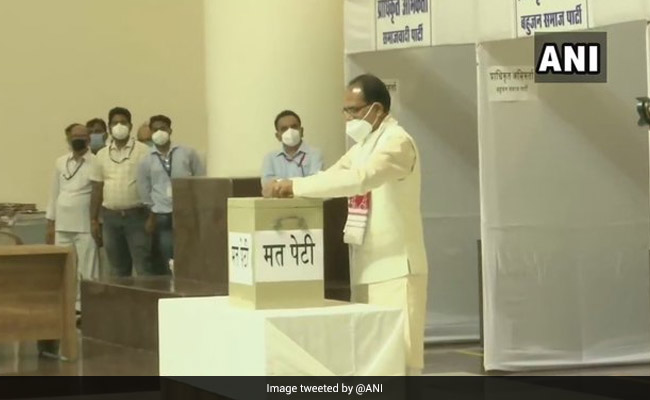 Rajasthan: Three buses, carrying BJP MLAs, reach state legislative assembly in Jaipur ahead of the polling for #RajyaSabhaElection today. In the state, polling for three seats to be held. pic.twitter.com/1lyvD51Bbt

Jun 19, 2020 10:21 (IST)
Voting for Rajya Sabha elections begins
Currently, the NDA has 91 of the 245 Rajya Sabha seats, the UPA has 61. The other opposition and the non-aligned parties together have 68 seats. The key candidates in today's election include Shakti Singh Gohil and Bharat Singh Solanki from Gujarat, Jyotiraditya Scindia and Digvijaya Singh from Madhya Pradesh and KC Venugopal from Rajasthan.