The government, however, said people who don't have ration cards of any state will not be given food grains at ration shops. 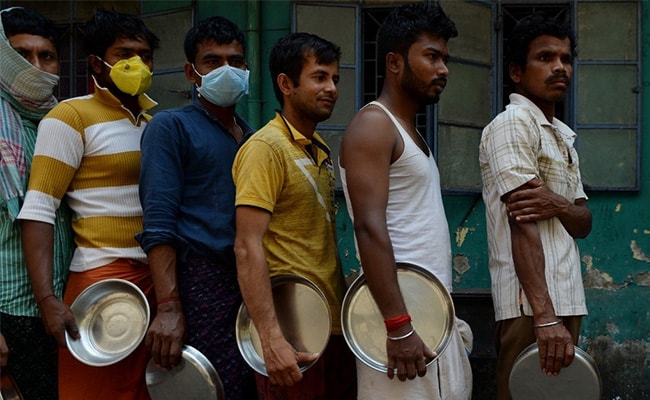 The Maharashtra government on Tuesday informed the Bombay High Court that migrants can use ration cards from their home states to get essentials from ration shops in Mumbai and those without cards can get meals at food camps and Shiv Bhojan Thali centres.

A division bench of Chief Justice Dipankar Datta and Justice Amjad Sayed was hearing a petition filed by Pune resident Vanita Chavan, raising concerns over supply of food grains to poor during the COVID-19 lockdown.

Mr Chavan, in her plea, claimed that food grains were not properly distributed through ration shops in the state and she sought direction to the government to provide essentials to people without ration cards, including migrant workers and wandering tribes.

The court had last week asked the state government to take a decision on whether it would procure additional food grains from the Food Corporation of India for migrant workers and the needy, who do not possess ration cards, amid the COVID-19 lockdown.

In its affidavit on Tuesday, the government said it has already procured food grains from the Food Corporation of India to meet the requirements of stranded persons and migrants in Pune district.

The government, however, said people who don't have ration cards of any state will not be given food grains at ration shops.

"As far as stranded migrant labourers and other needy persons are concerned, the state government is already taking requisite measures by providing ready food or food grain packets to them," the affidavit said.

Those without ration cards were given meals and food grain packets at shelter camps and they can also get meals at Shiv Bhojan Thali centres across the state amid the pandemic. The court took the affidavit on record and posted the matter for further hearing on May 19.