Hailing from Kahalgaon in Bhagalpur district, Krishna and Asha had boarded a train back home from Ludhiana in Punjab, where the husband had been eking out a living. 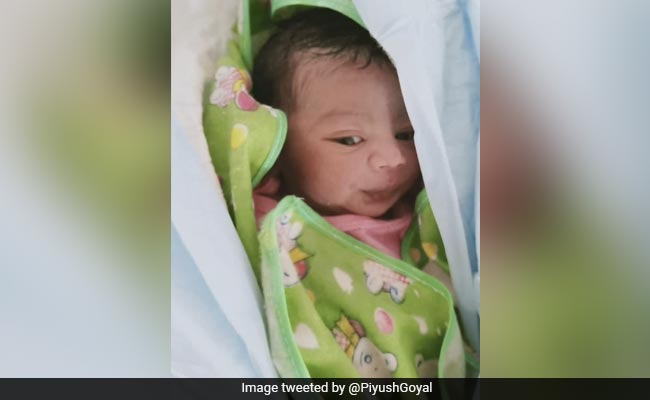 Railway Minister Piyush Goyal shared the pictures of the child on his twitter handle.

A timely tweet from an alert co-passenger to the railway minister brought immediate help to a young couple travelling by a Bihar-bound Shramik Special when the wife went into labour inside the moving train, an official said on Thursday.

Hailing from Kahalgaon in Bhagalpur district, Krishna and Asha had boarded a train back home from Ludhiana in Punjab, where the husband had been eking out a living.

The wife's pregnancy was in an advanced stage and the couple undertook the journey as they wanted to have their first child born on their home soil, though fate seemed to have other plans.

Asha began writhing in pain while the train was still over 100 km from the destination and Krishna, understandably, panicked on learning the train had no stopover nearby.

Rajnish Bharti, another Kahalgaon resident travelling by the train, whipped out his mobile phone and keyed in the message: "Sir @PiyushGoyal@PiyushGoyalOffc Asha Kumari from my hometown Kahalgaon is suffering from labor pain", and added details like the train and coach numbers besides the contact number of Krishna.

Within minutes of the tweet at 9.26 pm on Wednesday, "district authorities were alerted and the railways arranged for an emergency halt at Sirari station from where the woman was rushed to the Sadar hospital by an ambulance", said district public relations officer Satyendra Kumar.

"The DM, Inayat Khan, remained on the phone through the night. She relaxed only after learning that Asha and her child, a baby girl who was born around 6.30 am, were in good shape," the hospital's deputy superintendent, Sharat Chandra said.

"A sum of Rs 3,400, under schemes run by the Bihar government for girls being born in the state, has been transferred into their account," the DPRO said.

Krishna, the proud father, is full of gratitude for all who came up with help in their need of hour.

"I am thankful to Rajnish for his concern and presence of mind, the railway minister, who quickly issued the necessary instructions, and all officials, including those of the Sheikhpura district administration," he said.

Railway Minister Piyush Goyal was also a happy man. He shared pictures of the child, one of them showing the girl flanked by her parents, on his twitter handle and remarked, "Welcome to the beautiful newborn. Kudos to the officials who arranged for medical assistance to the mother when she suffered labour pain at Sirari station."