In accordance with the protocol to manage coronavirus cases, they will be kept in mandatory isolation for 14 days. 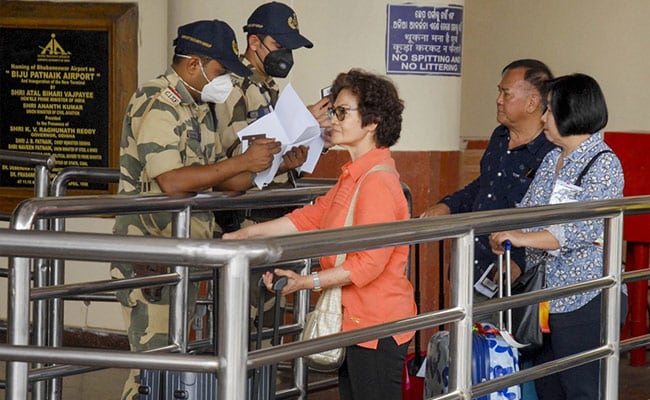 An Irishman, suspected of being infected with coronavirus, fled from a hospital on Thursday but was traced to a hotel in Odisha capital Bhubaneswar where he has been kept in isolation with another person with whom he had come into contact, officials said.

In accordance with the protocol to manage coronavirus cases, they will be kept in mandatory isolation for 14 days.

The man fled from SCB Medical College and Hospital on Thursday night following which a complaint was lodged with Mangalabag police station.

He was on a business trip to India since February 26 and had checked into a hotel in Bhubaneswar.

The 37-year-old went to the Capital Hospital in the city with an associate on Thurday for a check-up as he had mild fever and runny nose for two days.

"When the consulting doctor advised him to remain in isolation for 14 days, the accompanying associate suggested that he be referred to SCB Medical College in Cuttack where better facilities are available," Dr Ashok Patnaik, the Director of the Capital Hospital, said.

The two then reached SCB Medical College and Hospital without any escort, officials said.

"After reaching here, when the associate learnt that he was also supposed to be admitted in the isolation ward along with the Irish national, both escaped," Emergency Officer at the facility Dr BN Maharana said.

When the matter was brought to the notice of police, an alert was sounded.

The authorities of Capital Hospital also got worried as they had allowed the two men to leave for Cuttack unescorted. They started looking for the two and found them at the Bhubaneswar hotel.

"Both are now kept in mandatory isolation in the hotel concerned after proper counselling. If required, there blood and swab samples would be collected and sent to the National Institute of Virology in Pune for tests as per the protocol," the Director of Capital Hospital said.