Bengal Chief Minister Mamata Banerjee wrote to Prime Minister Narendra Modi on Sunday, asking for tax waivers on the import of medicines and equipment needed to fight the Covid pandemic.

She also called on the Prime Minister to strengthen health infrastructure and augment supplies of medicines and oxygen for treatment of coronavirus-positive patients in Bengal and across India.

Ms Banerjee said "organisations, individuals and benevolent agencies" had offered aid - from oxygen concentrators and cylinders to cryogenic storage tanks and COVID-19 medicines. She urged the centre to exempt such items from GST and customs duty, so as to "encourage private aid".

"... many of the donors and agencies have approached the state government to consider exemption of these items from duty/SGST/CGST/IGST. As the rate structure falls under the purview of the centre, I would request that these items may be exempted from GST/customs duty and other such duties and taxes, to help remove supply constraints..." she wrote.

Donations like these, the Chief Minister stressed, would "greatly supplement the efforts of the state government in meeting the huge gap in demand and supply" of medical resources.

Hours later Union Finance Minister Nirmala Sitharaman responded on Twitter, stating that a tax on vaccines (five per cent) and meds and oxygen concentrators is necessary to keep prices low.

"If full exemption from GST (Goods and Services Tax) were given, the domestic producers of these items would be unable to offset taxes paid on their inputs and input services and would pass these on to the end consumers by increasing their price," she explained in a string of 16 tweets.

This was Ms Banerjee's third letter to PM Modi - since being sworn in for a third term on Wednesday - on the Covid crisis in the state. On Friday she wrote to highlight a potential oxygen supply crisis. 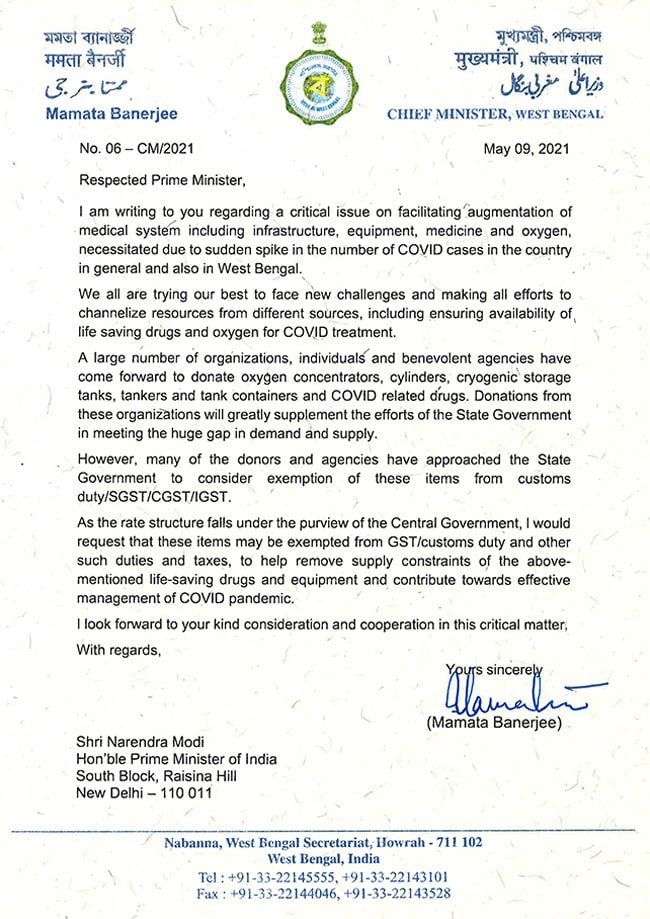 The Chief Minister said the demand had already gone up to 470 metric tonnes per day, and that it was expected to rise to 550 MT within seven to eight days.

She pointed out that the centre - which assesses and allocates oxygen to states - had increased supply of oxygen produced in Bengal to other states, rather than allowing it to remain in Bengal.

On Monday the centre said IGST (Integrated Goods and Services Tax, levied on inter-state movement of goods and imports) on Covid-related relief material from abroad would be waived till June 30.

Two weeks ago the centre also waived, with immediate effect for three months, customs duty and health cess on the import of Covid vaccines, oxygen and oxygen-related equipment.

Bengal has experienced a surge in daily Covid cases over the past few weeks, which coincides with campaigning and voting for the 2021 Assembly election that Ms Banerjee's Trinamool won.

Experts say the increase may be the result of poll campaigning, during which thousands violated social distancing to attend rallies and roadshows held by PM Modi and Chief Minister Banerjee.

Ms Banerjee has ordered a partial lockdown of the state, including extensive restrictions on movement and requiring all visitors to show a Covid-negative report no older than 72 hours.