It said the location was found to be much more "vulnerable" and "dispensable" as compared to south east Delhi and while the leaders remained safely glued to their TVs in their upscale locations, the brunt was borne by "the toiler and the bread winner". 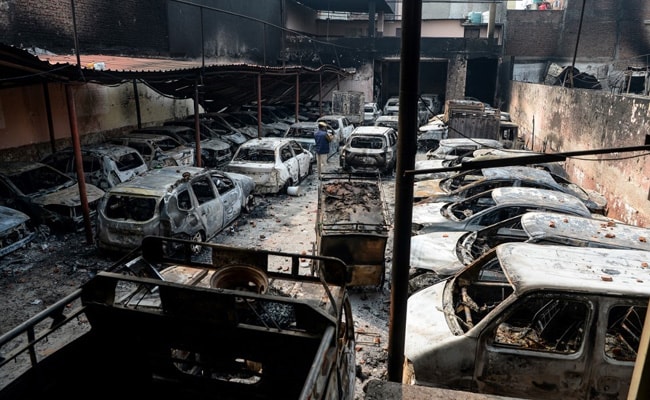 The "key conspirators" in the February riots chose north east Delhi with its unique economic, social and demographic matrix as it was the ideal ground for "mass scale mobilisation and violence", the police has alleged in its charge sheet filed before a Delhi court.

It said the location was found to be much more "vulnerable" and "dispensable" as compared to south east Delhi and while the leaders remained safely glued to their TVs in their upscale locations, the brunt was borne by "the toiler and the bread winner".

The charge sheet, filed on September 16, stated that protest sites were established despite resistance from local people, which was supported by statements of witnesses in the case.

"The choice of sit-in protest sites in pockets dominated by the Muslim domination, their proximity to arterial roads which opened up to the location of mixed populations and the careful distribution of supervisory domains from amongst the core members leaves no doubt that the intent was to create maximum communal strife, damage and destruction, once the initial sparks were fed to the media frenzy created by a select group of digital media houses," the charge sheet alleged.

It said the alleged criminal conspiracy was continuing and though it has suffered setbacks with the exposure and the arrest of the accused persons, it was neither aborted nor abandoned.

"With the leaders choosing to either remain safely glued to their televisions in the comfort of their homes in upscale locations of Delhi NCR using their communication devices as the weapon of the enlightened or leaving Delhi for outside destinations to create the most acceptable alibi, the brunt of the conspiracy was suffered by those who reside in most densely populated district of India where day-to-day survival requires blood and sweat of the toiler and the bread winner," the charge sheet alleged.

It said that certain inferences have been established regarding the FIRs registered between December 13, 2019 and December 20, 2019 against the incidents reported February, 2020.

"That all the hotspots of December 219 were repeated with varying intensities in February 2020. The modus operandi of the culprits in both the periods under reference is a text book copy of each other that is mobilisation fuelled by incendiary speeches followed by ''Chakka Jaam'' and violence. Almost every character who gained notoriety in February 2020 had been noticed as being present in the incidents of December 2019," it said.

It further stated that the primary targets of both the periods were the same, that is, police personnel followed by non-Muslim population.
The police however found there were two noticeable differences in the period of the incidents pertaining to December 2019 and February 2020, it said.

"While Jamia and Shaheen Bagh reported the most severe riots in December 2019, this locality was spared deliberately and avoided by the rioters in February 2020. And women at the forefront (both local and transplanted) were the universal underlying theme of the protest in February 2020 as against the incidents of December 2019," the charge sheet claimed.

It said the "key conspirators" had learnt their lessons drawn from December 2019.

"The whole of the analytics corroborates and reinforces the investigative findings that in spite of best efforts being put in by the key conspirators, the incidents of December 2019 remained a beta version of the carnage of February 2020.

"The key conspirators had learnt their lessons drawn from December 2019 and while executing the continuing conspiracy in February 2020 chose north east Delhi with its unique economic, social and demographic matrix as being the ideal ground for mass scale mobilisation and violence as it was found to be much more vulnerable and dispensable as compared to south east Delhi," it claimed.

Police have chargesheeted 15 persons for allegedly being part of a "premeditated conspiracy" in the north east Delhi riots in February.

"The crime committed by the key conspirators is not just legally but morally reprehensible," the charge sheet claimed.

On December 15 last year, protesters torched four public buses and two police vehicles as they clashed with police in New Friends' Colony near Jamia Millia Islamia during a demonstration against the amended Citizenship Act, leaving at least 40 people including students, policemen and fire fighters injured.

Communal clashes had broken out in north east Delhi on February 24 after violence between citizenship law supporters and protesters spiralled out of control leaving at least 53 people dead and around 200 injured.