Bhubaneswar's Deputy Commissioner of Police US Dash said the police had to baton charge the activists to prevent them from setting the police van on fire. 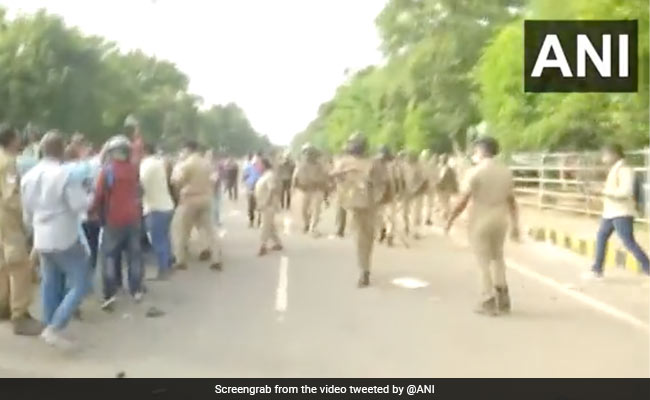 A fight broke out as police tried to stop the NSUI activists who were on the way to the Vidhan Sabha.

Activists of the Congress-backed NSUI clashed with the police in Bhubaneswar on Friday as they tried to gherao the Vidhan Sabha, demanding the arrest of minister DS Mishra over the teacher's murder in Kalahandi district.

A fight broke out as police tried to stop the NSUI activists who were on the way to the Vidhan Sabha.

The agitators, however, knocked down the police barricades on MG Road and hurled eggs and tomatoes at them. In return, police baton-charged the protesters, which left many injured.

#WATCH | Odisha Police baton-charge on NSUI workers in Bhubaneswar as they were allegedly trying to barge into the State Assembly premises after breaking through the security cordon yesterday pic.twitter.com/quSwApZgzo

The situation further aggravated when a section of the NSUI activists allegedly attempted to set a police van on fire. The blaze was immediately doused by the fire brigade personnel present at the spot, officials said.

Amid the baton charge, the protesters ran for safety into the nearby Congress Bhavan, the party's state headquarters. Chasing them, the police also entered the building and was seen kicking the doors, which were locked from inside.

Bhubaneswar's Deputy Commissioner of Police US Dash said the police had to baton charge the activists to prevent them from setting the police van on fire.

"We will soon identify the persons involved in setting the police van on fire and legal action will be taken against them," he said.

The officer, however, said that he had no knowledge of police entering the Congress Bhavan.

On Thursday, BJP's youth activists gheraoed the assembly over the same issue, leading to a clash with the police.

The opposition BJP condemned the police entering the headquarters of a political party, Congress Bhavan.

The ruling BJD accused both the BJP and the Congress of resorting to violence while staging demonstrations.

The opposition has been demonstrating, demanding the arrest of Minister of State for Home Mishra for allegedly shielding the prime accused in the teacher's murder case.

The 24-year-old teacher of a private school in Kalahandi district went missing on October 8 and her half-burnt decomposed body was exhumed from the playground of the school on October 19.

The president of the school's managing committee, who is allegedly closely associated with Mishra, is the prime accused in the murder case, which created a furore in the state.

Police have so far arrested two persons in the case, including the prime accused.