Mukhtar Abbas Naqvi accused the Congress and its allies of "irresponsible behaviour", saying these comments show their mindset on a sensitive issue like national security. 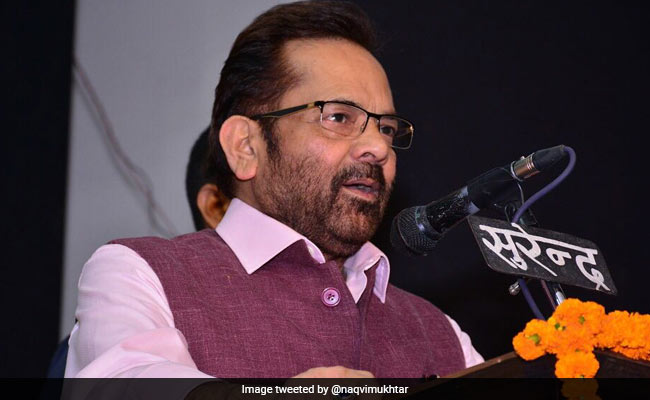 Mukhtar Abbas Naqvi said Congress and its allies are "crying" while terrorists are being hit. (FILE)

With the Congress seeking to corner the Narendra Modi-led government over details of the Indian air strike on terrorist camp in Pakistan, the BJP on Monday asked it to not mislead the country and insult armed forces with "fake and fabricated" stories.

Taking a dig at the opposition party, BJP leader and Union minister Mukhtar Abbas Naqvi said Congress and its allies are "crying" while terrorists and their sponsors are being hit.

"Is this a coincidence or a partnership? It is unfortunate when the entire country is speaking in one voice to salute our armed forces' valour, the Congress and its allies are raising such questions," he said.

Congress leader Kapil Sibal has cited several international media accounts reporting "no proof of militant losses at Balakot" to question PM Modi if they are "pro-Pakistan".

Congress chief spokesperson referred to Union minister SS Ahluwalia's reported remarks that the government never claimed to have killed 300-350 terrorists in the air strike to ask PM Modi to share the "truth" with the country.

Though there has been no official communication on the casualty figures among terrorists in the Indian Air Forces strike, some media reports have quoted official sources to say that anywhere between 300-350 terrorists were killed.

Mr Naqvi accused the Congress and its allies in the opposition of "irresponsible behaviour", saying these comments show their mindset on a sensitive issue like national security.

"The country no longer expect the Congress and its allies to welcome security forces' action to end terrorism but they should at least not mislead the nation and insult armed forces with fake and fabricated stories," he said.