Shivraj Chouhan was addressing a tribal convention to pay tribute to Tantya Bhil on his "Balidan Diwas" (death anniversary) at Patalpani - 35 km from Indore. It is believed that Tantya Bhil was cremated at Patalpani. 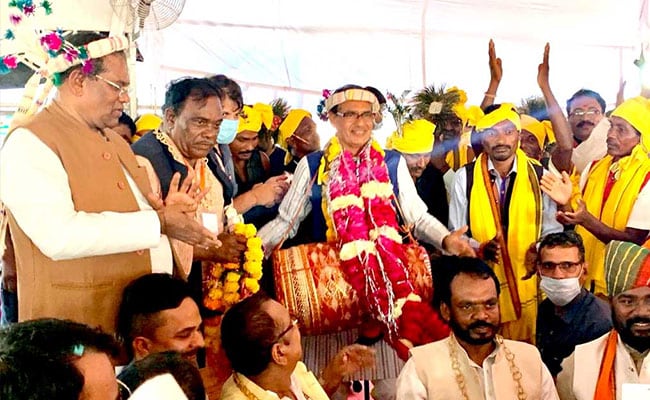 Shivraj Chouhan was addressing a tribal convention to pay tribute to Tantya Bhil on his "Balidan Diwas" (death anniversary) at Patalpani - 35 km from Indore. He also unveiled a statue of the tribal hero in the presence of Governor Mangu Bhai Patel. It is believed that Tantya Bhil was cremated at Patalpani.

"The people of this region worship Tantya Bhil. But I want to ask the Congress, which ruled the country and Madhya Pradesh for a long time, why it never paid obeisance to this holy land of Tantya Bhil and build his memorial?" Mr Chouhan questioned.

The senior BJP leader said it was the misfortune of this country that the Congress only glorified and established the Nehru-Gandhi dynasty (in history).

The Congress never remembered tribal revolutionaries like Tantya Bhil who made the supreme sacrifice for the country, he alleged.

Hailing Tantya Bhil as a "brave son of the mother India", Mr Chouhan said Bhil had fought against the exploitation by the British.

The British arrested him with the help of a traitor and sentenced him to death, the Chief Minister said.

Shivraj Chouhan announced the development of a memorial dedicated to Tantya Bhil at Patalpani besides a park and library based on this tribal revolutionary.

Known as the "Robin Hood of tribals", Tantya Bhil was hanged till death by the British on December 4, 1889, in Jabalpur jail on the charges of treason, according to experts in history.