Congress and JMM hold talks on government formation in Jharkhand 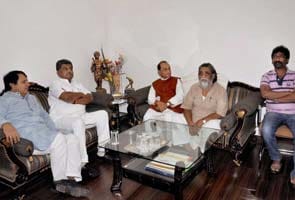 Ranchi: With President's Rule scheduled to end in Jharkhand on July 18, JMM and Congress leaders today held talks on the possibility of formation of government in the state.

A Congress leader said Mr Ahmed, Mr Prasad, and some other party leaders would leave for Delhi to carry on the dialogue with the JMM there amidst heightened possibility of government formation with the support of RJD and some independent MLAs.

"I will tell you tomorrow," Hemant Soren, a former deputy chief minister, said when asked about the initiatives on government formation.

RJDs Legislature Party leader Annapurna Devi, said, "We don't know anything about their initiatives on government formation. Nobody has contacted us."

"Why didn't they take this initiative after Presidents rule was imposed? Why this delayed?" she asked.

She, however, said, the party would abide by RJD chief Lalu Prasad's directives.

Promoted
Listen to the latest songs, only on JioSaavn.com
A couple of independent MLAs had been in the erstwhile BJP-JMM coalition government in the state before the JMM withdrew support on January 8 this year, leading to the imposition of central rule on January 18.