Confusion On Cabinet Expansion To Be Cleared Soon: G Parameshwara 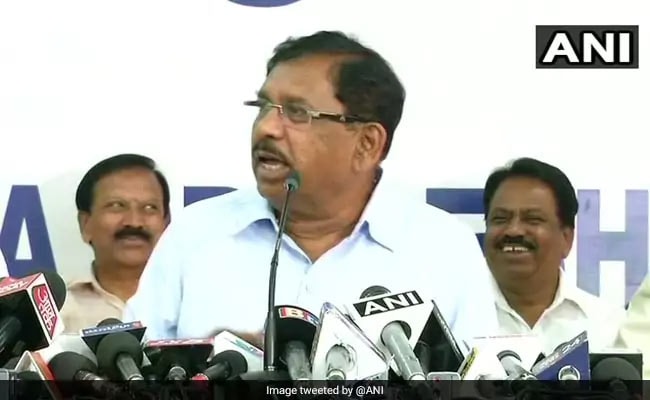 G Parameshwara was sworn-in as Deputy Chief Minister on May 23. (File)

Bengaluru: Karnataka Deputy Chief Minister G Parameshwara today said confusion regarding cabinet expansion and portfolio allocation between coalition partners, Congress and JDS, would be cleared and they would arrive at a final decision soon.

"This is a coalition government of two parties...we have decided on 12 (ministries) for them (JDS), 22 for us (Congress). We will share portfolios also like that, there is no confusion," he said.

Speaking to reporters here, Mr Parameshwara, who is also the Pradesh Congress Committee President, said, "We will clear the confusion soon and come to a decision."

Hectic parleys have been on between both parties on cabinet expansion and portfolio allocation since Chief Minister HD Kumaraswamy proved majority on the floor of the assembly on May 25, two days after his swearing-in on May 23.

Sources say both parties have not been able to arrive at a consensus on allocation of key portfolios, most importantly finance, which both Congress and JDS want in their kitty.

Asked whether finance portfolio would go to Congress or JDS, he said all portfolios would be decided together.

"Individually portfolios cannot be decided, if that was the case my portfolio should have been announced by now. As they have to be decided together, there is some delay. We will do it at the earliest," he added.

Mr Parameshwara was sworn-in as Deputy Chief Minister, along with Mr Kumaraswamy on May 23 in the presence of a galaxy of national and regional leaders that was seen as a platform of coming together of anti-BJP or anti-Modi front, ahead of 2019 Lok Sabha polls.

Asked if there was clarity now after discussions for so many days regarding allocation of portfolios, Mr Parameshwara said, "There is clarity, there are no problems. At the earliest we will come to a decision."

Senior Congress leader DK Shivakumar, who emerged as a key figure in keeping the party MLAs together before the trust vote of BJP's Yeddyurappa government, said he hoped hope that all confusions would get cleared soon.

Mr Shivakumar was reportedly upset over not getting the Deputy CM post.

He said both the parties came together to form the government for the 'larger good' of the state and its people,

"Our high command will decide, all confusions have been cleared, it will get cleared."

Promoted
Listen to the latest songs, only on JioSaavn.com
To a question about reports that he was demanding power portfolio, Mr Shivakumar termed it "false news."

Refuting reports about a tussle between him and JDS' H D Revanna, son of former prime minister HD Deve Gowda, for the power ministry, he said, "no such demands or discussions, our party and that party (JDS) leaders will sit together and decide."
Comments
G ParameshwaraHD KumaraswamyKarnataka