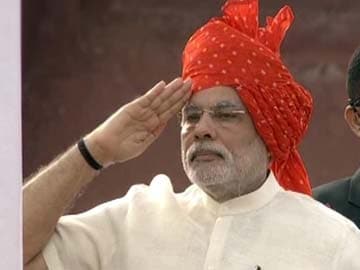 New Delhi: Prime Minister Narendra Modi, known for catchy slogans in his speeches, said today, "I tell the world, 'Come, make in India. Sell anywhere, but manufacture here.  We have the skill and the talent'," he said in his extempore speech on Independence Day.

Wearing a cream short-sleeved kurta and a saffron turban, Mr Modi reiterated the commitments that powered his campaign for the national election -a focus on creating jobs and attracting investment.

Mr Modi's party, the BJP,  won the biggest mandate in 30 years in May's election but has failed so far to deliver major  reforms to overhaul an economy suffering through the worst slowdown in two decades.

In the parliament session that concluded yesterday, the government suffered a major setback  when the opposition blocked its first big attempt at legislative reform in parliament - a landmark bill aimed to liberalise the insurance industry by lifting the foreign investment limit in the industry from 26% to 49%.

The proposal was sent to a committee on Thursday, leading to concerns that like the previous government, this one will struggle to push through important legislation.

Promoted
Listen to the latest songs, only on JioSaavn.com
Mr Modi delivered his speech from the imposing ramparts of Delhi's  Red Fort, where, in a break with tradition, more than 10,000 members of the public were present. The occasion is usually reserved for VIPs.