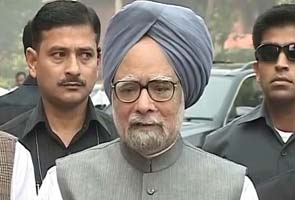 New Delhi: The Prime Minister's Office has today described his decision to allocate two coal blocks in Odisha to a company owned by industrialist Kumar Mangalam Birla as "appropriate and based on the merits of the case" placed before Dr Manmohan Singh.

In a press release, Dr Singh's Office has stressed that the Odisha government headed by Naveen Patnaik heavily urged the Centre to grant the coal blocks to Mr Birla, which played a large role in the Prime Minister's decision who was also the Coal Minister at the time. (Read full statement)

The coal licenses that were granted to Mr Birla's firm, Hindalco, are being investigated by the CBI as part of its inquiry into how and why the government gave mining rights at under-priced rates to private firms, costing the country lakhs of crores according to the national auditor.

The CBI has said that Dr Singh's office has not been cleared yet in its inquiry into what it alleges was a criminal conspiracy between the government's Coal Secretary PC Parakh and Mr Birla, both of whom have denied any wrongdoing.

Mr Parakh, the former Coal Secretary, has said that if the CBI believes there was a conspiracy, then it must include the Prime Minister because he endorsed Mr Parakh's decision to allocate the two coal blocks to Hindalco.

In 2005, the government decided those blocks should be given to the state-run Neyveli Lignite Corporation but later decided Hindalco should get them.

The PM's Office says that he received two letters from Mr Birla arguing that Talabira 2 and 3 were needed for his company's aluminium plant.

The Odisha Chief Minister Naveen Patnaik wrote to the Prime Minister stating that this business would generate more jobs and industrial growth than the state-owned Neyveli power-generating plant.

Promoted
Listen to the latest songs, only on JioSaavn.com
The Prime Minister says the coal ministry was extensively consulted and the decision after careful review was that Hindalco and two state-run firms should form a joint venture for the mining rights.

The note from the PM's Office says that based on the feedback from the coal ministry, and the fact that the state government and the Centre must concur on mining rights, he approved of the joint venture in October 2005.