"Clicking On Stranger Things...": UP Police's Wordplay On Netflix Series 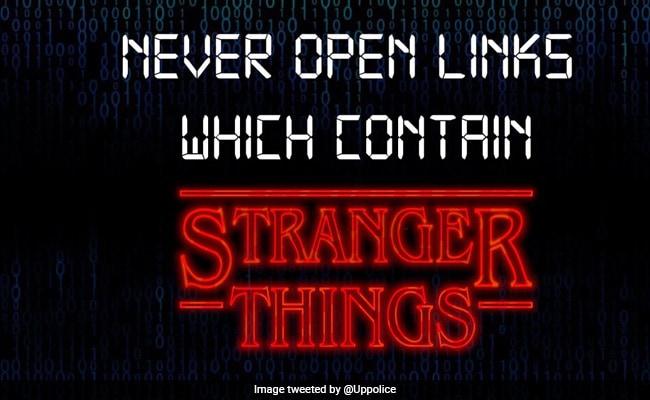 Stranger Things is a sci-fi thriller set in the 80s.

Stranger Things, the popular sci-fi series, premiered its final and fourth season on Friday. Within hours of the show being released, it became the top trend on the microblogging platform Twitter. Uttar Pradesh police used the hashtag to warn netizens of the perils of opening links that they are not familiar with.

"Clicking on 'Stranger Links' may lead to #StrangerThings," UP Police said on Twitter.

Clicking on ‘Stranger Links 🔗' may lead to #StrangerThings#StayCyberSafe#CyberSafetypic.twitter.com/LaUJUeear2

Stranger Things, made my Netflix, is a sci-fi thriller set in the 80s. It is about a bunch of young kids and their adventures in Hawkins, Indiana as a neighborhood science lab unleashes monsters on the town. The fourth season of the show stars Winona Ryder, Millie Bobby Brown, Noah Schnapp, Finn Wolfhard, David Harbour, Gaten Matarazzo, Caleb McLaughlin, Brett Gelman and Sadie Sink.

Such trending and funny tweets by the police have become frequent in recent years, with the police in several states like Maharashtra and Assam using social media to warn against engaging in criminal activity.

The humour ensures that the tweets are widely shared, which helps the police build awareness about issues.

For example, the Assam Police used a funny line from a TV soap, which had gone viral, to send a message about its anti-drug operations in September 2020.