Citizenship Act: While Kamrul Islam Choudhury was granted interim protection from arrest on January 9 by the Gauhati High Court, he was arrested on Thursday evening over a separate case of vandalism, sources said. 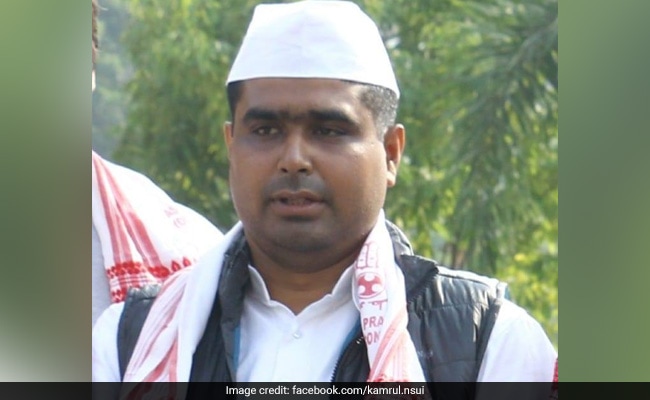 Citizenship (Amendment) Act: Kamrul Islam Choudhury was produced in the court on Friday.

Congress leader Kamrul Islam Choudhury, who is the president of party's youth wing in Assam, was arrested on Thursday over charges of damaging public property during violent protests against controversial Citizenship (Amendment) Act or CAA in Guwahati last month.

Mr Choudhury was arrested at Dispur police station when he went there to submit the interim bail court order which was earlier granted by the Gauhati High Court.

While Mr Choudhury was granted interim protection from arrest on January 9 by the Gauhati High Court, he was arrested on Thursday evening over a separate case of vandalism, sources said.

A case has been filed against him under sections 120B, 147, 148, 149 , 151 307 of the Indian Penal Code along with Section 3 of the Prevention of Damage to Public Property Act, 1984, among others. The complaint has been filed over his alleged involvement in the vandalism in the city on December 11 and 12.

He was produced in the court on Friday.

Last month, Assam Finance Minister Himanta Biswa Sarma had played a video footage at a press conference showing Mr Choudhury near the site of violence. A youth was seen shaking his hands in the clip.

Mr Sarma said the state government had evidence against several Congress partymen who were allegedly involved in the vandalism.

Congress has already dismissed the allegations as "political witch hunt".

Massive protests against the CAA, which makes religion test of citizenship in India for the first time, have swept the country in the last two months. The government has said it will grant citizenship to persecuted minorities of three-Muslim majority neighbouring countries - Pakistan, Afghanistan and Bangladesh. Critics say that the law is discriminatory against Muslims.

Several arrests have been made in Assam amid protests and violence. Student leader Manas Konwar, a member of Akhil Gogoi led Krishak Mukta Sangram Samiti (KMSS), was arrested by the National Investigation Agency this week.

Peasant leader Akhil Gogoi is already in jail along with his two other members - Dhirjya Konwar and Bittu Sonowal, in a terror case. The NIA has filed charges against Mr Gogoi and three of his close aides for being involved in Maoist activities.