Granted Bail, Rape Accused Chinmayanand Walks Out Of UP Jail To Grand Welcome

The 72-year-old former BJP leader was arrested last September after a law student accused him of sexually exploiting her for over a year. 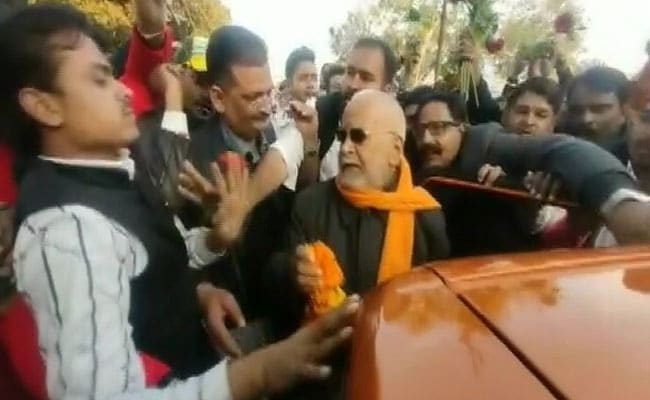 Chinmayanand was released from Shahjahanpur prison on Wednesday evening.

Former Union Minister Chinmayanand walked out of Uttar Pradesh's Shahjahanpur district jail to a grand welcome by his supporters on Wednesday evening, two days after he was granted bail by the Allahabad High Court in a rape case. A video tweeted out by news agency ANI showed an excited group of admirers shouting "Swamiji Maharaj Ki Jai (Long live Swamiji Maharaj)" and greeting him with roses and folded hands.

"He was let out after the completion of legal formalities," news agency PTI quoted prison superintendent Rakesh Kumar as saying.

The 72-year-old former BJP leader was arrested in September after a law student enrolled in one of his educational institutions at Shahjahanpur accused him of sexually exploiting her for over a year. Soon afterwards, the 23-year-old woman was also taken into custody on charges of trying to extort money from the former Union Minister.

Granting bail to Chinmayanand on Monday, Justice Rahul Chaturvedi had expressed astonishment that a "girl whose virginity is at stake" did not tell her parents or any judicial body about the sexual exploitation she was subjected to at the hands of the former politician.

"A girl whose virginity is at stake, not uttering a single word to her own parents or before the court regarding the alleged incident is astonishing conduct that speaks volumes about the ingeniousness of the prosecution story," the High Court said in its order, concluding that it was a "complete matter of quid pro quo".

Justice Chaturvedi claimed that the woman had, over time, "advanced (to) hatching a conspiracy against Chinmayanand and tried to blackmail him for ransom through obscene video clips" she had recorded. "Both parties crossed their limits, and at this stage, it is difficult to adjudicate as to who exploited whom. In fact, both of them used each other," the judge observed.

While granting him bail, the court also transferred the rape trial from Shahjahanpur to Lucknow.

The Uttar Pradesh BJP had earlier said that the three-time MP was no longer a member of the party. "I think (he has been out of the party) for a long time. Right after he fought elections and became a minister, maybe? It's not a question of documents and we cannot give an exact date, but I can confirm that Chinmayanand is not a member of the BJP," party spokesperson Harish Shrivastava told NDTV.

Chinmayanand was a Minister of State for Home in the Atal Bihari Vajpayee-led BJP government.