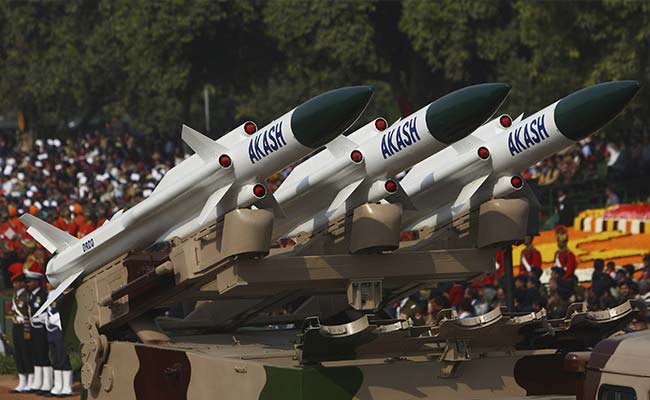 Beijing: Any moves by India to step-up military ties with Vietnam to counter China will create "disturbance" in the region and Beijing will not "sit with its arms crossed", state media said today, taking exception to a report that New Delhi plans to sell surface-to-air Akash missiles to Hanoi.

"If the Indian government genuinely treats its enhancement of military relations with Vietnam as a strategic arrangement or even revenge against Beijing, it will only create disturbances in the region and China will hardly sit with its arms crossed," an op-ed in the Global Times said, highlighting China's concerns over reports of supply of Akash surface-to- air missile system to Vietnam.

The supply of missiles was supposed to be a "normal arms sale, yet was portrayed by the Indian media as a response "to counter the Chinese threat", it said, referring to reports that the missile sale was in response to China blocking India's move to become member of the Nuclear Suppliers Group (NSG) and to block a United Nations ban on Jaish-e-Mohammed terrorist Masood Azhar.

"There should be no dispute when India decides to intensify its military ties with Vietnam, a crucial member of ASEAN as well as a key pillar of India's Act East Policy. Yet such ties should be built for the sake of peace and stability in the region, rather than stirring up troubles or anxiety for others."

"However, when India and Vietnam are in talks about possible sales, New Delhi seems to keep taking a sneak peak at Beijing as if the deal is stealthily aimed at China," it said.

Global Times, which is part of the ruling Communist Party of China's official group of publications, has been carrying articles targeting India almost on daily basis with aggressive and hostile language.

While striking threatening posture against India over its increasingly close-knit ties with Vietnam, another article in the same daily today warned Hanoi that it must improve ties with China notwithstanding the South China Sea dispute.

"Aside from its endeavour to improve relations with China, Hanoi must deal with rising nationalism at home intermingled with anti-China and anti-Communism sentiment at times, which is adverse to the CPV's (ruling Communist Party of Vietnam) leadership itself, as well as the development of China-Vietnam relations.

"Vietnam's leaders must have realised the importance of the issue and they have spared no efforts in developing cooperation with China in politics, economy and culture," it said, referring to the visit of Nguyen Phu Trong, the general secretary of CPV, to Beijing starting tomorrow during which he is scheduled to have talks with top Chinese leaders.

The article on India said "due to geopolitical factors, some nations have been cozying up to India over the years, which to a large extent contributed to India's fruitful development".

"New Delhi understands that the best strategy for itself is to continue its collaboration with all parties, instead of picking a side and turning hostile to one another. Otherwise, it might not only turn others' troubles to its own puzzles, but also suffer enormous losses of development opportunities."

"During a short visit Indian Prime Minister Narendra Modi paid to Vietnam in September last year, an expert in India voiced that India can make the same statement in China's backyard that they do in ours. Yet Vietnam is not a backyard to any country. Such a statement only mirrors India's outdated diplomatic mindset."

"India has a dream to grow into a great power. But under today's international circumstances, it will be extraordinarily hard to achieve the goal on its own. What India needs is more pragmatic cooperation with other countries," the report said.

Promoted
Listen to the latest songs, only on JioSaavn.com
"Beijing always emphasises the importance of cooperation with New Delhi and hopes the latter will join the Belt and Road initiative which will help promote the country's infrastructure construction, improve connectivity within the region and may even turn into a push to solve the India-Pakistan contradictions," it said.

"It is hoped that the hype in the Indian media does not represent the country's government. There are divergences between Beijing and New Delhi, yet there are more common interests that await the two to explore," it added.
Comments
Chinese MediaGlobal TimesChina-India RelationsSino-India RelationsVietnam-India Military TiesVietnam-India Strategic TiesIndia Military Deal VietnamIndia Akash Missile Deal VietnamSurface-To-Air Akash MissilesIndia-Vietnam Akash Missile Deal