"Groundless To View As Expansionist": China Responds To PM's Message

Prime Minister Narendra Modi today addressed soldiers during a surprise visit to Ladakh after the June 15 clash with China in which 20 soldiers were killed in action. 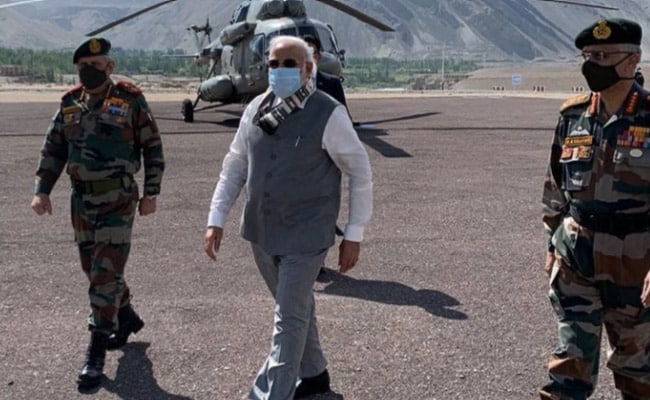 PM Modi said the age of expansionism is over, this is the age of development.

Stung by Prime Minister Narendra Modi's strong message against "expansionist nations" in his address to troops at a forward post in Ladakh today, China called the allegation "groundless and exaggerated".

"The age of expansionism is over, this is the age of development. History is witness that expansionist forces have either lost or were forced to turn back," the Prime Minister said, addressing soldiers during a surprise visit to Ladakh after the June 15 clash with China in which 20 soldiers were killed in action.

A sharp response came from Beijing hours later, through its embassy spokesperson.

"China has demarcated boundary with 12 of its 14 neighboring countries through peaceful negotiations, turning land borders into bonds of friendly cooperation. It's groundless to view China as 'expansionist', exaggerate and fabricate its disputes with neighbours," said Ji Rong, the spokesperson of the Chinese embassy.

This morning, PM Modi flew to Ladakh, where he was taken to a forward post, Nimu, located 11,000 feet high and on the banks of the river Indus. The visit was a morale-booster for the army, said Defence Minister Rajnath Singh.

It was also seen as a powerful statement against Chinese aggression at the Line of Actual Control (LAC).

The Prime Minister described as a "battlefield" the region that is not far from the Galwan river valley, the site of the clash between Indian and Chinese troops on June 15, the deadliest since 1967.

The PM addressed the 14 Corps of the Army that is called the Fire and Fury Corps.

"The enemy has seen your fire and fury...The weak can never accomplish peace, the brave do," he said.

The PM also underscored a clear message to China that India will not stop building roads and bridges in the border area, which is seen to have upset the Chinese in recent months.

"On border infrastructure, the allocation up by three times. Border areas have been developed. Roads and bridges are being built on the border speedily," he said.

Earlier, China's foreign ministry had also reacted to the PM's Ladakh visit. "India and China are in communication and negotiations are on for lowering the temperatures through military and diplomatic channels. No party should engage in any action that may escalate the situation at this point," said Zhao Lijian, Chinese Foreign Ministry spokesperson.