Chandrababu Naidu has been furious with the centre for not granting special status to Andhra Pradesh.

Hyderabad: N Chandrababu Naidu's Telugu Desam Party (TDP) walked out of Prime Minister Narendra Modi's coalition on Friday over financial support for Andhra Pradesh, delivering a huge blow to the BJP ahead of the 2019 national election.

Mr Naidu's party will also ask for a no-confidence motion against the government in parliament, deciding against playing second fiddle to rival Jaganmohan Reddy's YSR Congress, which submitted its notice on Thursday.

"I took the decision not for selfish reasons but for the interests of Andhra Pradesh. For four years I made all efforts, went to Delhi 29 times, asked many times. This was the centre's last budget and there was no mention of Andhra Pradesh," Chief Minister Chandrababu Naidu said in the Andhra assembly.

Later, in the assembly, Mr Naidu directly blamed PM Modi, saying "He is responsible for injustice to Andhra Pradesh." 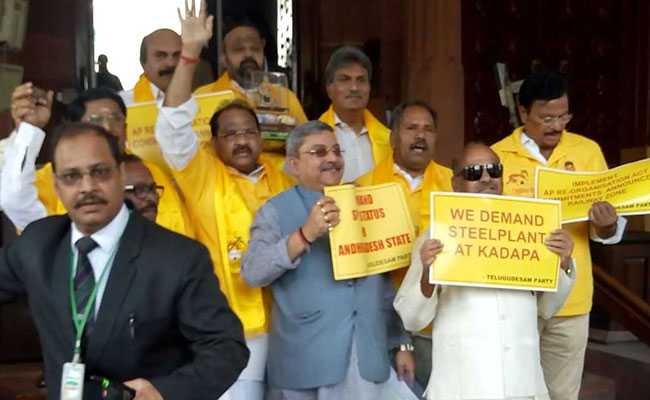 The centre had turned down TDP's demand for special category status to Andhra Pradesh.

The TDP, which was the first party to extend its support to the BJP in 2014, has 16 members in the 545-member parliament; its exit hits the BJP-led National Democratic Alliance (NDA) not by numbers but in perception.
"Far from being a threat, TDP's exit is a timely opportunity for the BJP to grow in Andhra Pradesh," said the BJP's GVL Narasimha Rao, declaring that his party would replicate its Tripura success in Andhra Pradesh, where elections will be held next year.

Last week, the TDP pulled its two ministers out of the central government but had stopped short of walking out of the alliance. Mr Naidu had said he tried to reach out to PM Modi but he "did not come on the line". But he left a door open for reconciliation.

Jagan Reddy's no-trust motion, which threatened to eclipse his party, is seen to have accelerated his exit.

The BJP had been resigned to divorce - keeping up efforts to placate its largest ally in the south even as it was seen to flirt with Jagan Reddy's party - but the pullout adds to its troubles after its Uttar Pradesh and Bihar bypoll debacle. In UP, the party suffered an unthinkable defeat in Gorakhpur, the long-term base of its Hindutva mascot Yogi Adityanath.

The Shiv Sena, another partner which announced separation recently, declared that "the Modi wave is over".

Promoted
Listen to the latest songs, only on JioSaavn.com
The Chief Minister also said the BJP was trying to use Jagan Reddy and Jana Sena boss Pawan Kalyan against the TDP.

The four-year BJP-TDP alliance crashed as Mr Naidu escalated his campaign for special category status to Andhra Pradesh as promised after Telangana was carved out of it in 2014. Special status would mean a large infusion of central funds to help with the state government's plans to develop its new capital Amaravati.