The opposition parties also demanded immediate reversal of all unilateral policy decisions, especially on the changes in labour laws. 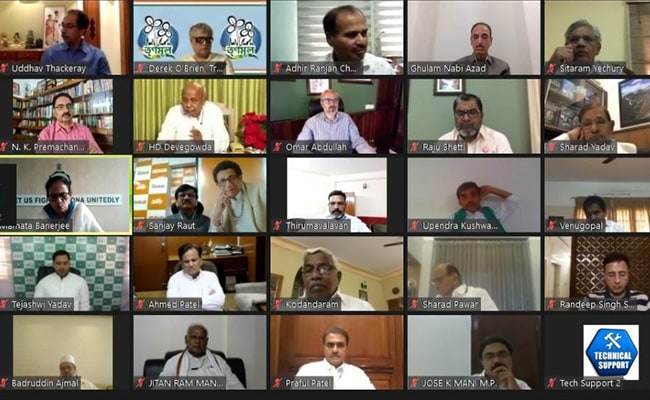 Leaders of 22 opposition parties on Friday accused the Centre of "unabashedly" usurping powers of states and demanded restoration of Parliament functioning and oversight with immediate effect.

The opposition parties also demanded immediate reversal of all unilateral policy decisions, especially on the changes in labour laws.

The leaders, who attended a meeting of opposition parties convened by the Congress through video conferencing, discussed the current situation arising out of the COVID-19 pandemic and the lockdown induced by it.

They put forth an 11-point charter of demands for the Centre at the virtual meeting.

The parties also accused the central government of having failed in discharging its responsibilities in a timely, effective and sensitive manner during the pandemic.

The opposition parties also demanded from the Centre direct cash transfer of Rs 7,500 per month to families outside the Income Tax bracket for six months and said Rs 10,000 should be given to them immediately along with free ration.

They also demanded that the Centre provide free transportation for migrant workers to their native places amid the lockdown, Congress chief spokesperson Randeep Surjewala said.

In view of the lockdown, he said the opposition parties have also demanded that the Centre immediately provide a financial package for states, besides a clear and meaningful economic strategy focused on revival and poverty alleviation instead of propaganda.

The parties in the statement said the Rs 20 lakh crore package and its contents mislead the people of India.

"We demand that the government present a revised and comprehensive package that will be a true fiscal stimulus in order to stimulate demand in the economy," the statement said.

"The 22 parties represent over 60 to 70 per cent of the country's population and hoped the prime minister and the government would take a positive view of their demands," Mr Surjewala said.