"Ceasefire" With Terror Groups During Ramzan Gets Home Ministry Worried

In two of the three attacks in Jammu and Kashmir, the security personnel couldn't defend their own weapons. 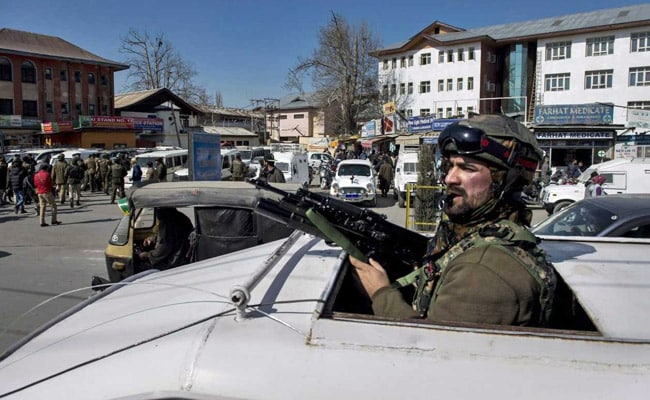 The news of the two weapon-snatching incidents has reached the North Block in Delhi. (File)

New Delhi: The centre announcing a unilateral "ceasefire" with terror groups during the month of Ramzan seems to have brought down the incidents of violence in Jammu and Kashmir. In the last two days, only three terror incidents have been reported in the Kashmir valley.

It is a major relief for the state administration as Prime Minister Narendra Modi is visiting Jammu and Kashmir today to inaugurate major infrastructure projects.

Massive security arrangements have been made for PM Modi's visit. "We have made adequate arrangements. We allowed namaaz in Jama Masjid today, but barring two places, no incidents of stone throwing were reported," a senior police official told NDTV.

However, the three terror incidents have given the Home Ministry a lot to worry about, as, in two of the three attacks, the security personnel couldn't even defend their own weapons.

The news of the two weapon-snatching incidents has reached the North Block in Delhi.

"In the first case, suspected terrorists snatched three rifles from police personnel at a guard post in Dalgate. In the second attack, the service rifle of a policeman was snatched at the university gate in Srinagar. The policeman was overpowered by terrorists in broad day light," the report that reached the North Block said.

In the third incident, a 23-year-old man was killed by terrorists in Kashmir as they suspected him to be a relative of an informer.

A similar ceasefire was announced by the centre in 2000. According to the ministry, for five months - 28 November, 2000 to 30 May, 2001- when the ceasefire was implemented, the number of incidents of violence had doubled.

"Terrorists had got time to regain strength. They then systematically started attacking forces and civilians," a former Jammu and Kashmir DGP told NDTV.

He said this move by the centre will backfire.

However, the officers posted in the valley differ.  "For the last one year, we were going after numbers in Operation All Out. But it was not yielding results," a senior police officer said.

This is not the first time in the last 12 months when operations against terrorists have been suspended. "Last year, when the elections were being held, operations were halted during Ramzan," a senior official said.

The officer welcomed the government's decision. "It is a much-needed respite to security forces that have been on the edge for last so many months," he explains.

Promoted
Listen to the latest songs, only on JioSaavn.com
As many as 67 terrorists have been eliminated by security forces in the first four-and-a-half months of the current year. "All their top brass has been eliminated," adds another officer.

Security forces in Jammu and Kashmir have been ordered not to launch operations during the holy month of Ramzan, Home Minister Rajnath Singh said earlier this week, announcing a ceasefire with terror groups in the state. The initiative is seen as a repeat of the ceasefire announced by the Atal Bihari Vajpayee government in 2000-2001.
Comments
SrinagarJammu and KashmirRamzan