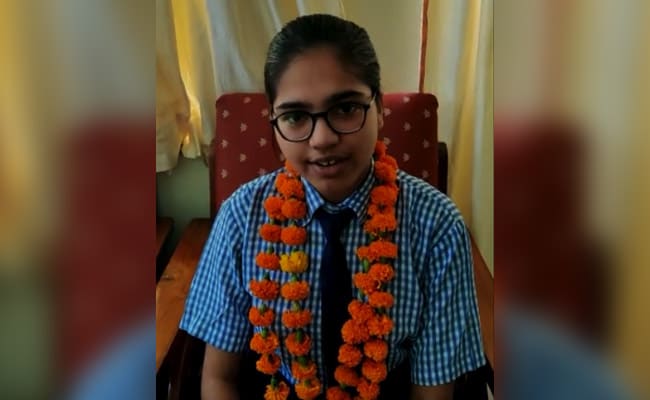 A young girl from Lucknow has scored 600/600 in this year's CBSE Class 12 exams, despite already daunting challenges posed by the vast syllabus and an academic year shortened and strained by the coronavirus outbreak.

"I prayed every day but also studied hard. I made notes for each subject and made sure that these notes were brief, so I could understand the lessons quicker and better," she said.

Ms Jain told news agency ANI, "In future, I would like to do research in history and learn more about our country's past."

The young girl, whose father owns a shop and whose mother is a home-maker, said that while she did not keep track of how many hours per day were spent in studying, she did ensure constant revision of all material.

"Whatever I studied I revised to see how much I understood of the lessons," she said, adding that careful analysis of what she had learned served her better than cramming.

"I also focused on revision and mock tests that helped me to score better," she added, noting that she relied more on learning from NCERT (national council of educational research and training) books than subject guides.

Divyanshi Jain, a 12th Standard student from Lucknow scored 100% marks in her Central Board of Secondary Education (CBSE) Board examination. She says, "In future, I would like to do research in history as a subject and learn more about our country's past." pic.twitter.com/IXAjGgr4o0

Ms Joshua also said she credited her parents and school teachers for her success.

The CBSE (central board of secondary education) released Class 12 results Monday morning. According to the institution, more than 38,000 students each scored over 95 per cent and nearly 1.6 lakh had scored 90 per cent or more.

The CBSE will conduct for papers cancelled by the coronavirus crisis as and when possible, the government has said.

Students appearing for these exams will have their overall results revised, in accordance with their performance in the exam. Marks awarded in improvement exams will be treated as final.