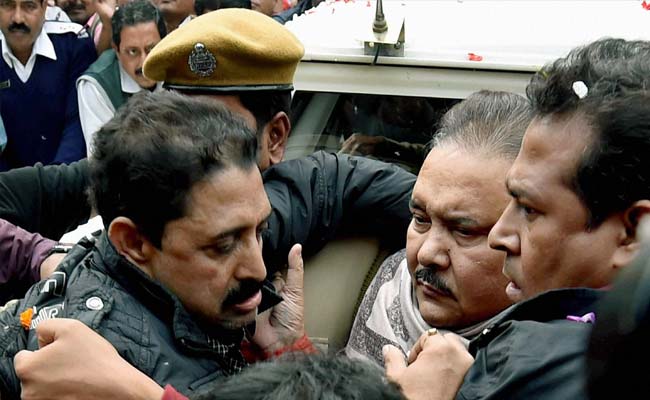 Madan Mitra (centre) being produced at a court in Kolkata on Saturdday. (Press Trust of India)

Kolkata: West Bengal Transport Minister and Trinamool Congress leader Madan Mitra, who was arrested on Friday in connection with the Saradha scam, was today produced before a court in Kolkata which remanded him to CBI custody till December 16.

There were angry scenes in court when pro-Trinamool lawyers protested against CBI lawyers' demand for seven-day custody of Mr Mitra. The Trinamool leader himself told the court that when he went to the CBI office yesterday, "everything was fine and I was offered a cup of tea by an officer at 4.30 pm who also said he would be leaving the premises shortly".

However, soon some other person came to him and told him he was under arrest as an order had come from Delhi, Mr Mitra added.

"It's a political conspiracy against me. The Chief Minister will say what is to be said," he later said.

His supporters protested outside the court shouting slogans against the Modi government and terming Mr Mitra's arrest "a deep-rooted conspiracy".

Many of these supporters had showered flowers on Mr Mitra as he was getting off the vehicle at court in the afternoon.

Party chief and West Bengal Chief Minister Mamata Banerjee too came out in Mr Mitra's support, leading a huge march of Trinamool supporters in Kolkata. Hitting out at Prime Minister Narendra Modi directly, she said if photo is proof of criminal conspiracy, then the PM should be arrested because he has appeared in photographs with Sahara chief Subrata Roy.

"If an image is a proof of criminal conspiracy, then PM should be arrested for Sahara Scam," Ms Banerjee said, adding, "A red diary was obtained after raiding Sahara office. It had several big names. Empty vessels sound much." (Read: 'There Are Images of PM With Sahara Chief, Should We Arrest Him?' Mamata Lashes Out)

The fallout of Mr Mitra's arrest was not limited to Kolkata. In Asansol, Purulia and other places, Trinamool workers blocked highways and burnt effigies of the Prime Minister. In Burdwan, they even clashed with CPM workers which also took out a march in Kolkata to demand that CBI immediately interrogate Ms Banerjee.

Promoted
Listen to the latest songs, only on JioSaavn.com
Mr Mitra is the first minister of the ruling Trinamool Congress to be arrested in the scam in which lakhs of people were cheated out of their savings. Two party MPs, Srinjoy Bose and Kunal Ghosh, were arrested earlier.